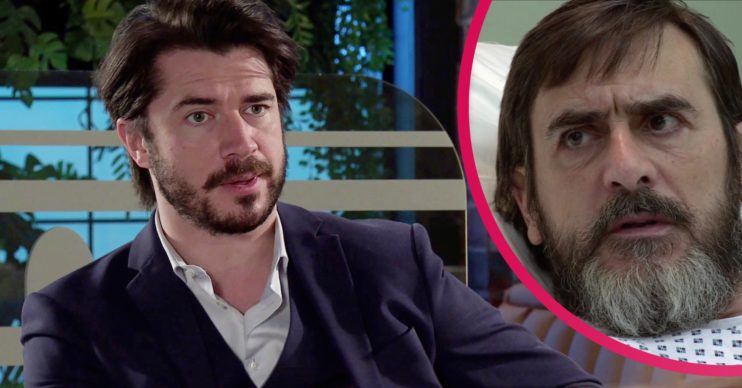 Coronation Street SPOILERS: Adam makes the decision not to donate his liver to Peter

Coronation Street spoilers reveal Adam makes the decision not to donate his liver to his uncle, Peter. But what does this mean for Peter?

In next week’s scenes Sarah begs Adam to reconsider donating his liver to Peter, suggesting he’s only doing it out of guilt and it’s a hell of a price to pay.

After their conversation, Adam is left feeling torn.

He soon tells Sarah that he’s taken his name off the donor list and wonders how he’s going to break the news to Peter and Carla.

Meanwhile Carla tries to chase Lucas for a payment, only to find his phone number is no longer in use.

Carla admits to Sarah that she was right not to trust Lucas as it seems he’s gone bust.

Later Sarah and Carla go to Lucas’s premises and see it is deserted. They jemmy the door open and reclaim their stock.

Read more: What happened to Jenny’s son Tom in Coronation Street? Who is Daisy’s dad?

The two women load up the van with boxes of knickers and make their getaway.

Back on the street, Adam breaks the news to Peter that he’s no longer will to be his liver donor.

Carla takes her anger out on Sarah

Carla is gutted to hear that Adam has pulled out. But she’s left angry when she discovers that Sarah encouraged him to pull out.

Carla is fuming with Sarah and soon confronts her. She accuses her of talking Adam out of the transplant to get back at her for sleeping with Adam.

Sarah insists that Peter is a lost cause. What will happen to Peter? Will he be able to find a new donor?

Will you be watching next week’s Coronation Street? Leave us a comment on our Facebook page @EntertainmentDailyFix and let us know what you think of these Emmerdale spoilers.