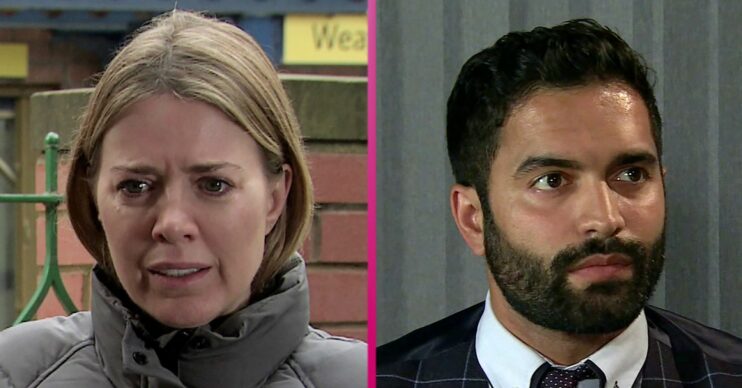 Coronation Street SPOILERS: Abi turns the tables on Imran as he gains custody of Alfie?

Abi turns the tables on Imran next week

Coronation Street character Abi was devastated when the judge granted custody of her son Alfie to Imran in tonight’s episode (Wednesday, May 4).

Abi tearfully told her baby boy he would be going to live with his dad.

But will Abi get revenge on Imran for lying in court?

Coronation Street: Abi devastated as Imran gets custody of Alfie

Abi gave birth to baby Alfie a few months ago. However as he was born prematurely, he was kept in hospital.

Toyah and Imran decided to fight for custody of Alfie and get married.

However Imran has been paying a man named Ben to follow Abi and get proof she’s using drugs again.

Abi was giving Dean money so he would leave her alone, but Ben took pictures and took them to Imran, claiming she was buying drugs.

Imran told him as there were no drugs photographed it couldn’t be used in court, so Ben suggested he lie and say he saw Abi buying drugs.

In court, Imran told the judge he was convinced Abi was cheating the court ordered drugs tests.

He then brought Ben out and Ben lied about seeing Abi and Dean exchanging cash for drugs.

Although the judge wasn’t impressed with Imran for having Abi followed, she granted custody to Imran, but allowed Abi visitation.

But what will Abi do next?

Meanwhile Leanne suggests to Imran and Toyah that they have a naming day for Alfie.

But Imran tells Toyah that Abi won’t be going to the naming party.

How will Abi react to not being invited to her own son’s party?

Soon Abi makes a discovery that could benefit her.

Abi sees Ben buying drugs and films the exchange, but Ben clocks her.

She gives him a choice, either he admits that Imran paid him to lie or she’ll share the video of him buying drugs with his boss and the police.