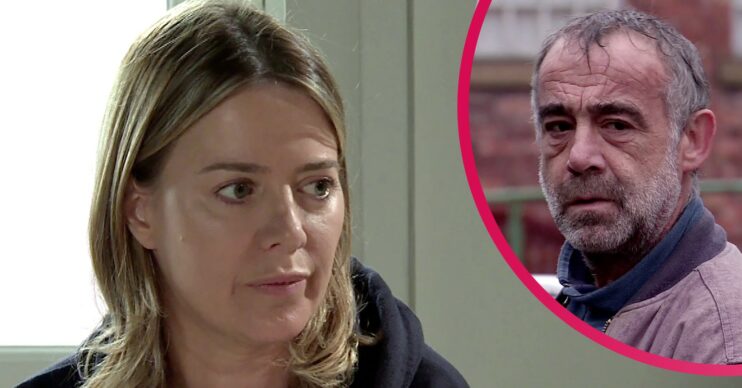 Coronation Street character Abi, played by Sally Carman, could be in danger as location filming appears to be setting up a car accident of some sort.

In pictures obtained by Metro.co.uk, cast and crew have been filming scenes which show Abi in the car with a stranger, who is currently unidentified.

Who could this person be? Are they going to be involved in a car crash?

Abi has been through a lot over the last year including losing her son Seb and being held in gunpoint in a sewer by his killer, Corey.

Read more: Why is Lydia stalking Adam in Coronation Street? What happens next?

Abi is currently hiding the secret that she betrayed her husband Kevin Webster with a one-night-stand with Imran Habeeb.

While Imran’s girlfriend Toyah knows Imran cheated, she doesn’t know who with.

Speaking about what’s to come for Abi in 2022, Corrie Iain MacLeod told Entertainment Daily and other media: “Abi is somebody that’s use to finding herself in a pickle and 2022 will continue that in vain.

“It’s another really challenging year. It will see her risk losing Kevin and Jack. It will also see her pitched into a protracted legal battle, where it’s a David and Goliath struggle for her again to try and keep hold of her life.”

He continued: “It also threatens to destroy Imran and Toyah’s relationship. Because, at present, Toyah thinks she knows the whole truth about what went on in the aftermath of the murder trial, but of course, she does not.”

Will Toyah find out what happened between Imran and Abi?