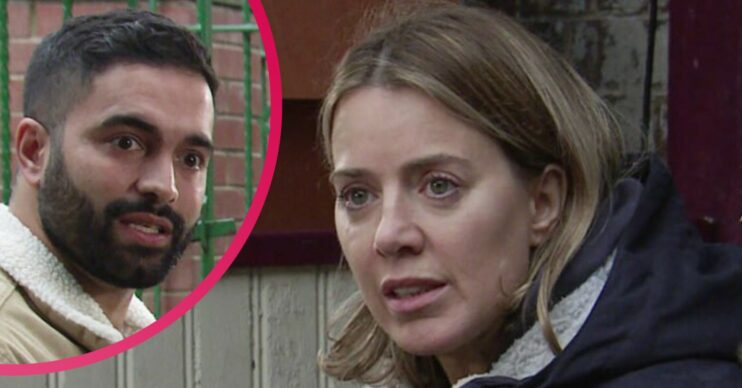 Abi has spent the festive season preoccupied with Kelly Neelan and wanting her revenge.

But she’s soon left with a bombshell revelation of her own as she thinks she might be pregnant.

Abi was in a relationship with now-husband Kevin Webster at the time she slept with Imran.

It was the night of the verdict in Corey Brent’s trial for killing Abi’s son, Seb Franklin, and Abi was all over the place.

It wasn’t revealed until a month later that she had, in fact, slept with Imran that night.

As she panics over her pregnancy fears in January, Abi arranges to meet Imran in Victoria Garden.

She tells him she’s going to do a pregnancy test and if it’s positive, she will tell Kevin the truth. Abi must be pretty sure Imran is the father then…

As they’re talking, neither of them spot Kevin approaching, but has he overheard them? Does he already know everything?

The soap has not revealed whether her test is positive or negative, but Abi would be already three months gone if she is.

And something tells us their one-night stand secret has to come out sooner rather than later.

Could a baby bombshell be the thing to reveal it?

It would surely be the final nail in the coffin between an already strained Toyah and Imran. She knows he cheated, but not with who, so this wouldn’t go down well.

She also is unable to have kids of her own, so standing by while her fella has one with another woman would not be easy at all.

Do Abi and Kevin split up?

And as for Abi and Kevin: they finally seemed to get their happy ending when they got married despite her grief over Seb causing her to hunt down and try to kill Corey.

Kevin forgave her for her rash actions and has even covered for her knowing the gun used to kill Natasha Blakeman was brought to the Street by Abi.

He whisked her off on honeymoon while the dust settled and since their return has shown her nothing but love.

Kev even sorted a Christmas surprise from beyond the grave from Seb, leaving Abi declaring it the best Christmas ever.

But will this secret tear them apart and destroy their happy ever after?