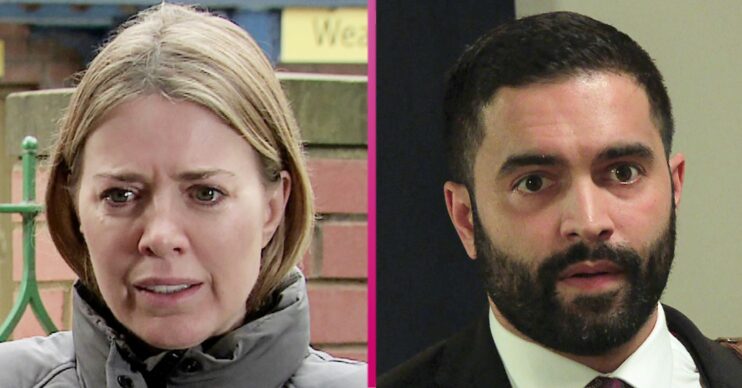 Coronation Street spoilers for next week reveal Abi takes a bottle of morphine off a distressed Kelly.

Although she has no intention of taking it, it looks like it could land her in trouble as she tries to fight for custody of Alfie.

Will Abi get custody of her son or will Imran ruin her chances?

As Kelly tries to come to terms with her mum’s death, she is overwhelmed when she discovers she stands to inherit everything from her dad, including their family home.

Kelly asks Gary to go and check on the house for her.

Gary goes to Rick’s neglected house and is faced with a photo of smiling Rick. He packs up some of Kelly’s belongings to take back to her.

As Kelly looks at the reminders of her childhood, she’s overcome with emotion and hurries out.

Kelly take out her mum’s little bottle of morphine from her pocket and unscrews the top just as Abi arrives.

Later Imran tells Abi he’s going flat hunting and suggests she and Alfie could move in with him but she turns him down.

When Imran learns from Kelly that Abi stopped her from taking morphine, Imran is alarmed to realise Abi now has the morphine in her possession.

He shares his fears about Abi with Toyah and tells her that he intends to fight for custody of Alfie.

Toyah is shocked when Imran tells her he would love her help raising baby Alfie and suggests they could be a family.

Abi tells Kevin she would like to return to work at the garage so she can afford to buy some things for Alfie.

But she’s shocked when she learns Imran plans to fight for custody of their son.

Abi meets up with her solicitor, Elliot and tells him she wants to apply for full custody of Alfie.

Later Abi approaches Imran and makes it clear she has every intention to fight him all the way for their baby.

Meanwhile Imran resorts to dirty tricks. Who will get custody?