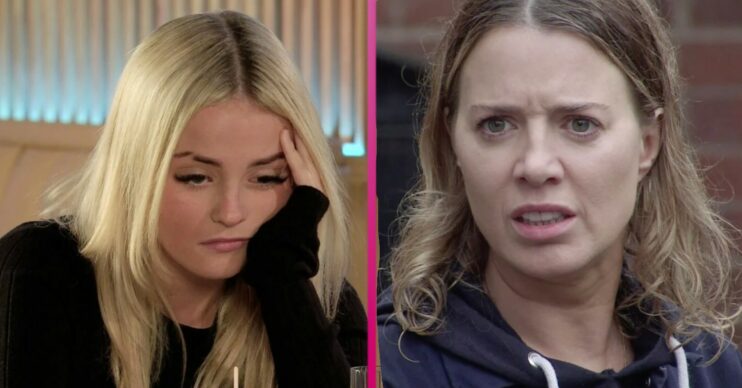 Abi Franklin is preparing to spend her first Christmas without son, Seb, in Coronation Street and spoilers reveal she’s set on revenge.

When Abi discovers that Kelly has moved into No.7 and that Maria has given her a job at the barbers, she seethes with rage.

Nina tells Abi that she found Kelly in a bad way and that, while she can’t forgive her for what she did, the hatred has to stop.

On Boxing Day, she finds Kelly has left flowers in Seb’s memorial garden. Later, Abi glowers at Kelly with hatred as she spots her enjoying a meal with Dev and Aadi in the bistro.

She’s unrepentant and Kevin is worried when Abi vows that soon she’ll never have to worry about Kelly again.

But what is she plotting?

Imran watches on concerned when Abi later stops Kelly from going into the barbers and pulls her up on it. Abi says she just wants Kelly out of her life for good.

He tells Abi that she’s done some shameful things in her past which infuriates Abi and she slaps him.

Later, when Maria questions why she didn’t come to work, Kelly lies and says she couldn’t be bothered and Maria fires her.

Why does Abi hate Kelly in Coronation Street?

At the police station, he urges her to get some help before she ends up back in prison. But who can Kelly turn to?

When Aadi rails at Dev for making Kelly homeless and revealing she’s turned to drugs, even Abi is shocked.

But at her drug recovery group Abi is livid to find Kelly there and shoots her a look of hatred as she describes her troubled childhood.

As Kelly continues to talk about how she’s done some terrible things and used drugs to escape, Abi finds herself feeling a flicker of empathy.

Abi then goes on to bear her own soul to the group. Could this be a turning point for her?

Later, Kevin pleads with Abi to let go of her hatred for Kelly but will she be able to move on?