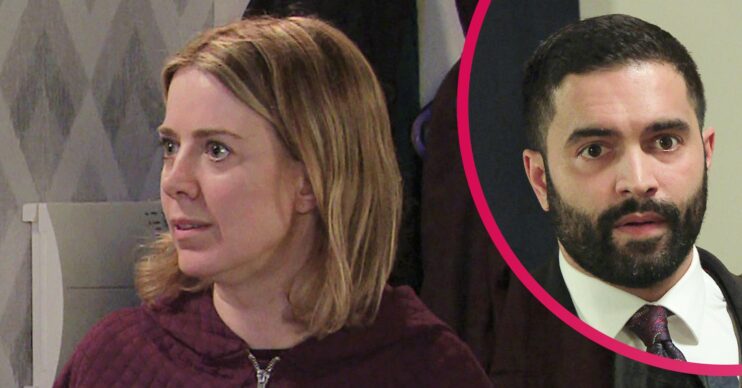 Coronation Street spoilers for next week reveal Abi fights for custody of her son.

Heading off to see Abi, Imran promises Toyah he’ll be back soon to look at more wedding venues.

The couple exchange guilty looks. Will they get to planning their wedding?

Later Abi arrives in the courtroom to show her support for Abi, but Abi and Imran are flooded with guilt.

The local authority solicitor lists a number of reasons proving Abi to be an unfit mother and stating why Alfie should be taken into care.

Imran pleads Abi’s case, doing everything in his power to convince the judge that Abi has changed.

Will the verdict go Abi’s way?

Imran is determined to be in Alfie’s life

Later Toyah tells Imran he’s done all he can for Abi and it’s time to step back and concentrate on Elsie’s adoption hearing.

Imran hides his uncertainty, but Abi is furious.

After Abi bans Imran from seeing Alfie, he declares he will do whatever it takes, even if it means putting his name on the birth certificate.

Is Imran going to tell Toyah the truth?

Imran tells a pleased Toyah that he has set Abi up with a solicitor free of charge before heading off with Abi to register Alfie’s birth.

When Toyah bumps into Abi carrying a package with Alfie’s paperwork and acting strangely, she assumes she is back on drugs and warns Kevin.

Kevin goes over to Abi’s and while she makes the tea, he looks for the package.

It’s not long before he finds the birth certificate stating Imran is Alfie’s father.

Meanwhile Toyah and Imran sit down with the social worker to discuss adopting Elsie, but is Imran’s world about to turn upside down?

Read more: Is Izzy Armstrong still in Coronation Street? What is she up to?