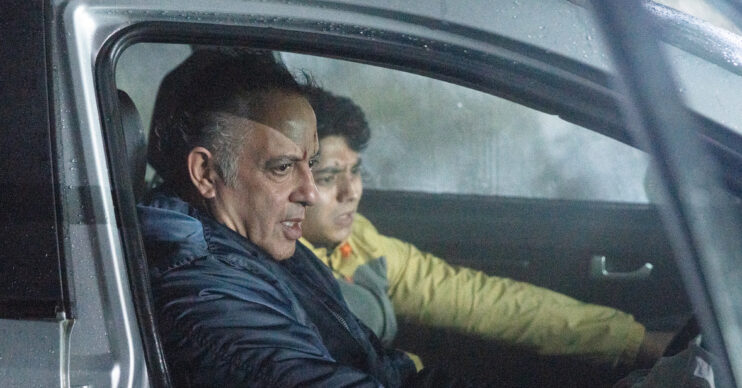 Dev left his son to die - and now Aadi knows it

Aadi Alahan will pretend to not know his dad Dev chose to let him die in Coronation Street next week.

Viewers watched as Dev and his children, Aadi and Asha, were involved in a car crash that left their lives in danger.

Dev only had time to save one of his children from the impending car explosion.

And despite Aadi begging for his help, Dev decided to save Asha instead.

Aadi was forced to do all he could to save himself – and he managed it with only minor injuries.

Read more: Coronation Street SPOILERS: What’s next for Corey as a homeless man is spotted with his incriminating backpack?

However Dev is under the impression that Aadi doesn’t remember his cruel choice.

This week Aadi confided in Summer that his dad saved Asha from the crash but left him to die.

Unaware of what Aadi knows but worried about his son Dev offered him the role of assistant manager across the Alahan empire.

A tearful Aadi told Summer that Dev’s job offer is just his way of apologising for leaving him to die and that Asha has always been his favourite.

When Aadi confirmed that he’d like to accept the job offer, Dev was thrilled and ordered Asha to fetch the champagne from the fridge.

However all is not what it seems.

And it soon becomes clear this is the beginning of a long storyline where Aadi smarts in the confirmed knowledge he isn’t Dev’s favourite.

Aadi has revealed a nasty streak before when jealousy over Asha has got the better of him, so what revenge plan does he have up his sleeve?

Corrie boss Iain Macleod teased: “There’s an ongoing story that’s about Aadi and Asha’s relationship and the tensions between them as twins.

“Having one of the twins feeling ‘I’m over here, when is anyone going to notice me?’ felt like really ripe territory and very believable family drama.

Read more: Coronation Street: What’s next after Johnny dies and Natasha is shot?

“I think anyone that’s got a sibling will get it.”

He added: “I love that family. I love their performances individually and collectively, so putting them in the middle of this week was largely to do with that.

“But it was also to create this story going forward that I think is going to be really resonant for a lot of people across the country that have got siblings themselves.”