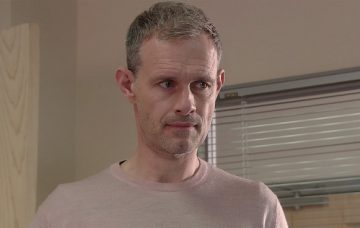 Coronation Street SPOILER: Is THIS the identity Nick’s mystery caller?!

Who is the mysterious 'E'?

Nick Tilsley has got some making up to do on the Street next week and it’s with Leanne who he wants to build the most bridges.

But while he pays for a flat for Toyah and Leanne to move into, Shona is left feeling suspicious by the amount of mysterious calls her brother-in-law keeps getting.

David makes a comment about the amount of missed calls Nick has from someone called ‘E’ and Nick is barely able to mask his panic.

Later Shona overhears him talking to someone on the phone and saying that he’s looking after his sick mum.

Knowing that Gail is fit as a fiddle, Shona confronts Nick.

As the row escalates, David drops a huge bombshell.

Meanwhile, as Toyah, Leanne and Simon all move into the new flat, Si tells Leanne that it’s obvious she still loves Nick.

Has he hit a nerve? Will Leanne and Nick get back together? Or is Nick hiding a major secret?

It was revealed last month that Nick would have a secret wife in tow when he returned to the cobbles.

There has been no sign of her yet, but could this be who the mysterious caller is?

Not only will his exes – Carla and Leanne to be precise – be shocked to hear the news, we think his over-protective mum Gail might have something to say about the clandestine nuptials, too.

Sadly for Nick, the marriage clearly didn’t end well and he returns to Corrie without his wife and with his tail between his legs.

But she soon tracks him down!

Nick (played by Ben Price) was last seen in June 2017, when he left town in the wake of a traumatic near-death experience with quick sand.

Returning in time for Tracy and Steve’s wedding, Nick tries to lick his wounds while keeping his estranged wife a secret from everyone.

However, furious at being spurned, she tracks him down for answers…

Although we don’t yet know who will play his wife, an insider told the Daily Star: “When news broke that Nick was returning to Corrie, there were lots of questioning over why. Now it seems he’s run away from his wife.”

As Nick seems set on a divorce, perhaps fan theories will come true that he’ll eventually end up with either of his former lovers Carla or Leanne.

Trouble is, that’s all a bit complicated at the minute…

Leanne has been dating Imran, but has just slept with Steve, while Carla still has a thing for Peter!

Jane Danson, who plays Leanne in the ITV soap, recently admitted she’d love her character to reunite with Nick.

She said: “Ultimately Nick is the love of Leanne’s life. They’ve been through so much.

“They were teenage sweethearts and his mum, Gail, hates her. It’s always been like Romeo and Juliet!

“So I would love it if they could settle down for good. Sometimes people do end up happy on Coronation Street!”

Really Jane? Right now we can’t think of anyone…

Are you excited to see Nick back in Weatherfield? Leave us a comment on our Facebook page @EntertainmentDailyFix and let us know what you think!