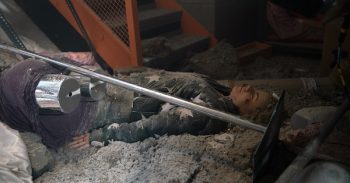 Who will make it out alive?

There’s devastation on the cobbles next week when the factory roof collapses and it’s a race against time to pull the survivors out of the wreckage. But when someone dies in the disaster, who has got blood on their hands?

Coronation Street’s much-anticipated factory roof collapse drama unfolds next week, and with all the Underworld staff in the factory at the time of the disaster, the list of who could be meeting their maker is endless…

After finding out that Carla plans to outsource some work at the factory to make some much-needed cash, Underworld staff decide to stage a protest, demanding their jobs are kept safe.

Joined by Gemma and Emma, Sally and co march into the building and start to barricade themselves in… something they will definitely soon regret.

Deciding to make their point heard, Sally and Gina head up onto the scaffolding and hang some homemade banners for everyone to see.

Up on the roof the sisters start fighting, and with months of tension all spilling out at once, the sisters are so angry with one another that they don’t realise the roof isn’t safe until it is too late and it gives way, taking Sally down with it.

As the roof collapses, Sally screams as she plummets down into the building, with the roof trapping everyone inside as the whole thing gives way.

With dust and rubble everywhere, the factory staff fight to get out of the death-trap building… but there are bodies everywhere and some people aren’t in a good way.

As a burst water pipe seeps water across the floor towards a loose power cable, it looks like time is running out for everyone trapped inside the factory.

Tim, Abi and Tyrone fight their way into the factory before the emergency services can arrive – but their plans to search for survivors is near impossible with all the rubble everywhere.

As the trio fight to save lives, there’s a terrifying noise that signals the last bit of roof is about to give way, raining down on those still trapped inside.

After laying her heart on the line with Peter Barlow, Carla Connor is horrified when she heads back to work and finds her friends and colleagues fighting for their lives.

Carla’s world caves in as she realises that she knew the roof wasn’t safe… but things are only set to get worse for the Underworld boss when it is announced that someone has been found dead in the wreckage.

Knowing that she didn’t do anything about the dodgy roof before it was too late, Carla is terrified that she has got blood on her hands… or is someone else entirely to blame for the devastation that has hit Weatherfield?

Who do you think is to blame for the roof collapse? Leave us a comment on our Facebook page @EntertainmentDailyFix and let us know what you think!