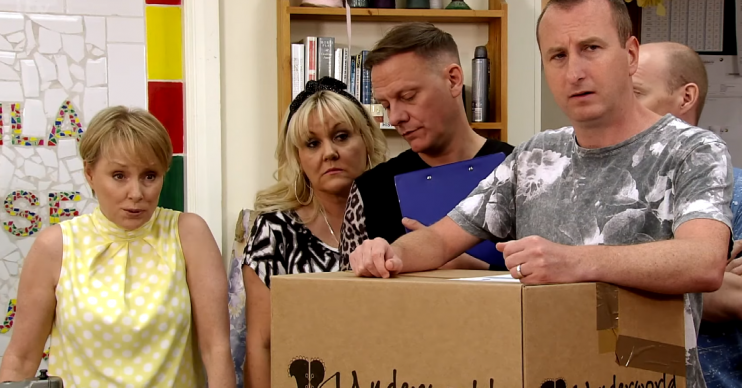 They aren't happy at Sarah's suggestion

It appears more bad news is in store for the staff at Underworld factory in tonight’s episode of Coronation Street (July 17 2019).

A couple of months ago, Weatherfield residents were left devastated when Underworld’s factory roof came down, taking the life of Rana Habeeb.

Since the collapse of the factory roof, staff have been moved to work in the community centre doing packing and none of them are happy about it.

In tonight’s episode Sally, Beth, Kirk, Izzy and Sean are all discussing what they plan on doing with their work bonuses when Sarah announces one of their clients has ordered more stock which needs to be packed and sent.

Sean and Izzy then make the comment that they should be sewing the knickers themselves in a proper factory for proper money.

Sally then points out they are doing “a menial” job for “very little money” in “intolerable” working conditions.

Sarah says she would try to get them back in the factory as soon as she could but it means the staff won’t get their bonuses.

As the staff look furiously at their boss, she says they would need to use all the profits towards the rebuild as the investigation is ongoing meaning it could take months for the insurers to pay out.

Sarah tells them if they want the rebuild now they will have to pay for it themselves. She does point out it would be a short-term loss but a long-term gain.

Beth asks what Nick thinks but Sarah reminds her she is building a case against Nick and they are all running Underworld now.

Sally suggests they hold a shareholders meeting but Beth refuses to give up her bonus and says whoever brought the roof down should pay.

Coronation Street viewers know that Gary Windass is responsible for the roof collapse after he tampered with the roof to get more work.