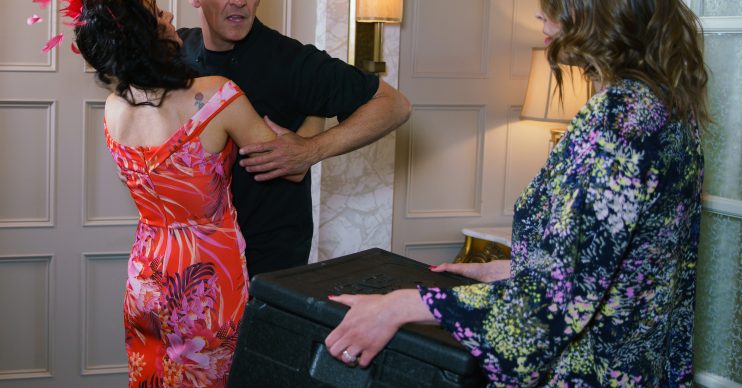 How is he going to get out of this one?

There’s yet more drama for Coronation Street’s Robert Preston next week as his two worlds continue to collide when Tracy catches him looking seriously cosy with Vicky. How will he explain his way out of this one?

And despite a few near-misses, the chef has been surprisingly successful at stopping his double life being exposed.

But next week it seems that could all be about to change when an already suspicious Tracy catches him in a compromising position with Vicky.

Tracy has been watching Robert’s every move since husband Steve revealed that he saw Vicky and Robert in a pub garden together.

But next week she catches them together herself… will she tell Michelle?

The trouble starts when Tyler tells Robert that Vicky isn’t feeling well and he promises to visit her later that day.

But Vicky isn’t happy playing second fiddle all the time and heads to the Bistro to give him a piece of her mind.

But while Robert just desperately wants to get Vicky out of the Bistro before anyone sees her, he’s left horrified when she suddenly doubles over in pain and he drops everything to rush her to hospital.

Vicky cries with relief when the doctors tell her she is suffering with gallstones and that the baby is perfectly healthy.

With the drama over, she later proudly tells Robert that Tyler has been invoked to the Youth Foundation Awards and that they’re going later in the week.

But while Robert promises that Vicky will be his main priority from now on after their baby scare, he is then horrified to realise that the awards Tyler and Vicky are going to is the same one that Michelle will be catering for.

Desperate to stop the two women in his life being in the same room at the same time, Robert advises Vicky to stay at home and get better, but she is adamant that she won’t miss Tyler’s big moment.

At the awards Robert is busy handing around canapés and panics when he spots Tyler and Vicky across the room.

Determined to stop Michelle seeing Vicky he ushers Vicky out of the room and begs her to go home and put her feet up. But while the pair are sharing a friendly hug, Tracy walks in and catches them together.

As Robert tries to talk his way out of this latest pickle, an oblivious Michelle is thrilled as she is offered the job of Events Manager with the company she is doing the catering for, and she can’t wait to tell her husband-to-be the good news.

Robert is pleased for Michelle, and he tells her to accept the job knowing it would mean she is busy with work, leaving him time to sneak off and spend more time with pregnant Vicky.

Taking the lie even further, Robert then tells Michelle that he has been offered a mentoring role overseeing budding chefs at a young offenders’ unit, and even pretends that his new fictional job would mean a few nights away from time-to-time.

But things are set to get even more complicated for Robert when he goes to see Vicky and he finds Tyler’s dad, Jed, is there.

Robert is jealous of the closeness Jed and Vicky share and he soon learns what’s brought Vicky’s ex back after all this time… but does this mean Robert could soon be ditching Michelle for a new life with Vicky?

Do you think Robert can keep his lies up for much longer? Leave us a comment on our Facebook page @EntertainmentDailyFix and let us know what you think!