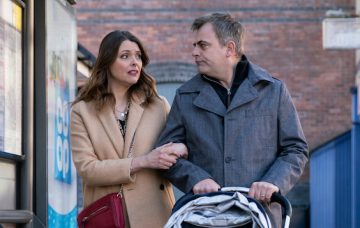 Will Amy agree to their plan?

Steve and Tracy come up with the idea to adopt pregnant daughter Amy’s baby next week. But how will she react when they sit her down and reveal their plan?

While Tracy and Steve have known for a little while that they’re set to be grandparents, Amy has managed to keep them in the dark about who the father of her baby is.

And despite being determined to have a termination at first, a chat with Faye Windass has made Amy think twice about keeping her baby – something that Steve and Tracy are trying to get their heads around.

Next week sees Steve tell his daughter that if she wants to cancel her termination and look into other options then he will support her, and Amy’s thrilled that her dad is on her side.

Tracy is a slightly harder nut to crack, but eventually she agrees with Steve that Amy is the only one who can decide her baby’s future.

As the couple start to wonder what it would be like with a new baby in the house, they try to work out a way that Amy can keep her baby while also finishing school, leading to Steve having a lightbulb moment.

Steve eventually comes up with the idea that he thinks solves everything… they bring the baby up as their own and adopt their own grandchild.

The parents sit Amy down and tell her their idea, but how will she react when they tell her the baby would be raised as her brother or sister, rather than her son or daughter?

Liz isn’t sure about her son’s idea, warning Steve and Tracy that adopting Amy’s baby is a huge commitment and asking if they have really thought through the long-term implications.

Later in the week the drama of Amy’s pregnancy rumbles on, leading to Steve and Tracy starting to feel guilty about the position that their little girl has found herself in.

Convinced that their selfish squabbling last year means that they have neglected Amy, leading to her mixing with the wrong crowd. But are they to blame?

With Tracy and Steve’s solution to her baby dilemma playing on her mind, Amy has definitely got some serious thinking to do.

But will she agree to their plan?

Do you think Amy should agree to Steve and Tracy’s plan?? Leave us a comment on our Facebook page @EntertainmentDailyFix and let us know what you think!