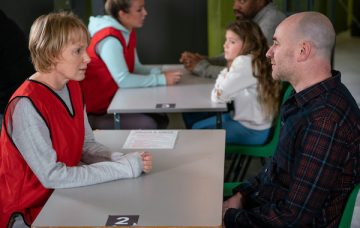 If spending Christmas Day in jail after being found guilty of a crime you didn’t commit wasn’t bad enough, things are set to get even more upsetting for Sally Metcalfe when husband Tim comes to visit her to reveal a shocking secret… he’s slept with her sister!

After his huge work Christmas party that saw him singing carols from the rooftops in Victoria Street, Tim wakes up on Christmas Eve with a banging headache – and the horrifying realisation that he did something that he shouldn’t have the night before.

When he then gets a visiting order from Sally to visit her in jail, Tim is torn over what to do. But after a chat with Eileen he realises Sal needs him and he agrees to go along and see his wife.

But as he’s setting off Faye drops the horrifying bombshell that she saw him in bed with Gina the night before, and the penny finally drops for Tim… he must have drunkenly slept with his wife’s sister!

Tim confronts Gina and tells her that he is disgusted with himself for having sex with his sister-in-law… and knowing that he can’t look Sally in the eye, he doesn’t show up for his prison visit, leaving poor Sally devastated.

While Faye might not be that fussed that her dad has cheated on Sally, Sophie is fuming when she finds out.

Tim realises he is going to have to face the truth at some point and tells everyone he’s going to visit Sally on Christmas Day to tell her everything.

Despite knowing his marriage is doomed from the moment he reveals his secret, Tim goes along to see Sally.

But instead of it being a fun and festive catch up, Sally is left utterly heartbroken when Tim drops the bombshell that he has slept with Gina.

But while Sally is left to nurse her broken heart in prison, Tim slopes back to Weatherfield and is forced to sit and have his Christmas dinner with Gina, Yasmeen and Geoff.

But when Sophie arrives, she reveals that she’s been doing some digging on untrustworthy Gina.

Having met up with Duncan herself, Sophie has discovered that Gina has also been meeting with the man who framed Sally, and she confronts her aunt about her two-faced lies on Christmas Day.

But as Gina tries to defend herself, she eventually confesses everything – even the fact that she is head over heels in love with Tim!

But where does this leave Sally and Tim’s marriage? Is the feeling mutual for Tim and could the forbidden pair have a future together? Or will Tim start to try and mend his relationship with Sally bit by bit?

Do you think Sally will ever forgive Tim for his betrayal? Leave us a comment on our Facebook page @EntertainmentDailyFix and let us know what you think!