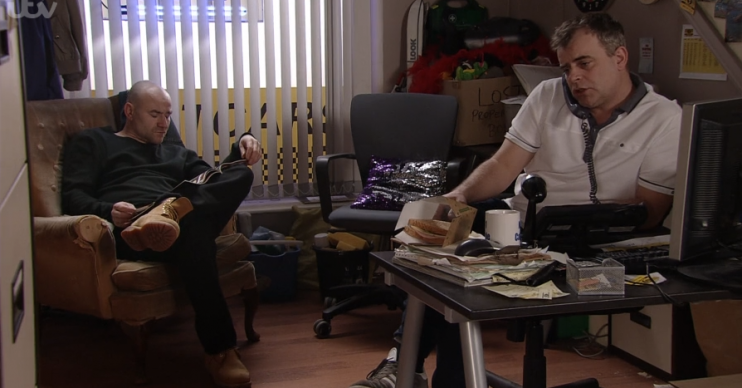 Is Steve about to find himself out of a job?

Soap fans will see long-serving character, Steve, get himself caught up in some seriously dodgy drama this week when he starts doing illegal street pick ups in his cab to make some money so that he and Tracy can move house.

But that’s not the only financial worry that Steve has got plaguing him… he also needs to compete with rival Weatherfield cab firm GoLucky who have got a fancy app and are stealing Street Cars’ business.

However, going against his morals soon lands Steve in serious drama when he gets caught up in an armed robbery this week.

As Tracy tells him he needs to keep the robbery to himself and not risk losing his cab licence by going to the police, Steve is shocked when he gets to work next week and finds the police quizzing Tim about the crime at the petrol station.

As Tim denies all  knowledge of a robbery, Steve realises he has got to come clean and tell the police it was him driving the cab, and that he had no choice but to go along with the hold up because the robber threatened him.

But as Tim reels from Steve’s bombshell, will the cabbie go the whole hog and confess to collecting an illegal pick up from the street?

Steve is edgy after the robbery and wants to lay low for a while, but Tracy is adamant that he needs to get back out there and make some more money.

So with Tracy’s words ringing in his ears, Steve heads out to collect more dodgy fares, except this time he takes a baseball bat under his seat for protection.

But it seems trouble is following Steve next week, because as he collects three men from a bowling alley, he is fuming when they refuse to pay their fare and leg it from the car.

Steve gives chase with his baseball bat, but disaster strikes when one of the fleeing customers is hit by an oncoming car as he tries to escape Steve.

Steve is mortified that trouble has hit again, but thankfully the young lad is okay and he gets up and walks away from the accident.

It is soon revealed that the lad plays for Weatherfield County football team and doesn’t want any fuss, knowing he would get into big trouble with his club if he was caught up in drama like not paying a cab fare.

Steve takes the teenager to the cab office to check he is okay, but he’s horrified when the police are there waiting for him.

Just how much the police know about Steve’s illegal money making scam remains to be seen, but he’s clearly in some sort of trouble because by the end of next week Street Cars in under new management…

With Tim and Steve at odds, and Steve only allowed to work the switches and man the phones, it seems the cab firm is more doomed than ever.

But thankfully Eileen, Liz and Tracy have got a plan – they’re taking over the running of Street Cars!

Tracy and Liz will be driving cars, and Eileen will apply for an operators licence… but how will Steve feel about his business being taken over by the women in his life?

Do you think Tracy and co will do a good job running Street Cars? Leave us a comment on our Facebook page @EntertainmentDailyFix and let us know what you think!