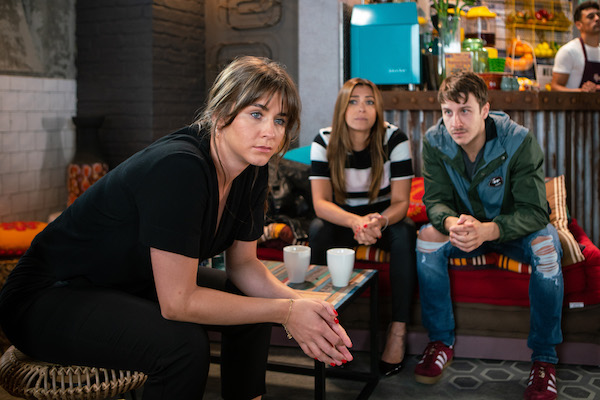 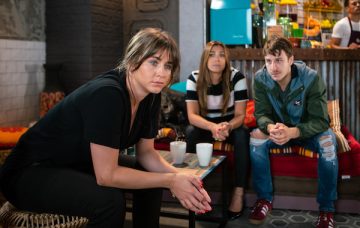 Coronation Street SPOILER: Sophie forced to lie to the police after shock death

She's stuck between a rock and a hard place

Coronation Street’s Sophie Webster finds herself torn next week when Ryan Connor begs her to lie to the police about the night that Cormac Truman died.

Viewers will see the newcomer suffer a fatal drug overdose at the Connors’ flat on Friday this week (September 28th) after a night out with Ryan, Sophie and Bethany.

But while Ryan isn’t directly to blame for the dealer’s death, he failed to call for an ambulance after panicking about the drugs involved, and instead called his sort-of-brother Ali.

Viewers will see doctor Ali fighting to save Cormac’s life at the end of this week, and is stunned when he asks Ryan how long the ambulance is going to be and he realises one hasn’t been called.

Because of Ryan’s delay in calling the emergency services, Cormac will die before the ambulance can reach him.

But in scenes set to air next week, the police start to ask questions about the night that Cormac died and when Ryan realises the amount of trouble he’s in, he comes up with a cover story.

Determined to avoid any trouble, Ryan comes up with a story about how he left Cormac alone in the flat, and that when he got back his friend was already dead.

Michelle agrees that this is the best way to go, and the pair decide they need to get Sophie on their side.

Ryan tells her that he panicked when Cormac collapsed and didn’t call an ambulance quickly enough, begging Sophie to back up his story when the police question her.

While Sophie reluctantly agrees to help Ryan out and protects her friend when the police arrive at Speed Daal to question her, Paula is fuming that her girlfriend has been put in such a tricky situation.

She’s desperate for Sophie to tell the truth, but will she listen?

Everyone knows that lying to the police never ends well, but could these lies land Sophie in trouble with her relationship as well as the police?

To make matters worse, Michelle and Ryan are left feeling awful when Cormac’s dad Ronan comes to see them, thanking them for everything they did for his son on the night that he died.

But just as Ryan decides to leave Weatherfield to escape his guilt, the police find the drugs in his coat pocket and he’s suddenly in more trouble than ever.

The police arrest him and he confesses to his delay calling the ambulance, but it turns out the police are the least of his worries.

When Ronan finds out the truth about his son’s death, Ryan is terrified about what he’ll do and deliberately smashes up the police station in an attempt to stay locked up.

Thinking that he will be safer behind bars, Ryan even lashes out at a police officer to completely seal his fate.

But is he right to think being in jail will be enough to keep Ronan at bay?

Do you think Sophie should lie for Ryan? Leave us a comment on our Facebook page @EntertainmentDailyFix and let us know what you think!