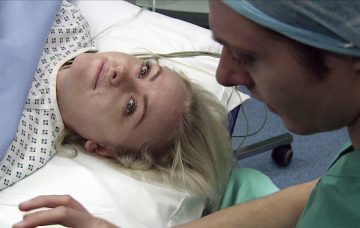 Sinead has her baby, but will she be okay?

There’s joy and heartache heading for Sinead and Daniel next week when their baby is born, but when Sinead takes a dramatic turn after the delivery, Daniel fears she might not live to meet their son.

As the oncologist breaks the sad news to pregnant Sinead that her cancer has spread, she’s left devastated when he explains that she will need to start radiotherapy immediately, but they need to deliver her baby first.

Realising that she is going to meet her baby that same day, Sinead struggles with the happiness at the thought of holding her baby, but also the heartache that she might not get to see him grow.

But Daniel fears the worst, knowing that the delivery is early, and wonders if he is about to lose both his baby and his wife at the same time.

As Beth, Kirk, Carla, Craig, Sarah and Izzy hear the news that Sinead is about to give birth, they descend on the hospital and throw her an impromptu baby shower.

Sinead is touched by their thoughtfulness, but it is all too much for Daniel and he rushes out of the room, unable to cope with the pressure of the day.

Later Sinead is taken to theatre and with Daniel by her side, she gives birth to a little baby boy… but instead of it being the amazing moment the pair had hoped for, Daniel and Sinead are heartbroken when he is whisked away to neonatal to be looked after.

But there’s more drama to come with Sinead then takes a turn for the worst, passing out in front of Daniel, leaving him fearing he is about to lose everything.

As Sinead’s future hangs in the balance, an emotional Daniel introduces Ken to his tiny son, telling him how terrified he is after the day’s events.

With Ken by his side, Daniel is forced to face the fact Sinead might not be there to see their son make it to his first birthday.

Thankfully, Sinead seems to be okay and after naming their little boy Bertie, Sinead finally meets her baby son.

But little does the new mum know, Daniel is hiding a huge secret from her.

The doctors discover that Bertie has a bowel condition, but Daniel decides to keep the news from a delicate Sinead, worried the stress would be too much.

With both Sinead and Bertie’s futures looking bleak, how long will Daniel be able to hold it together for the sake of his new family?

Do you think Daniel is right to keep secrets from Sinead? Leave us a comment on our Facebook page @EntertainmentDailyFix and let us know what you think!