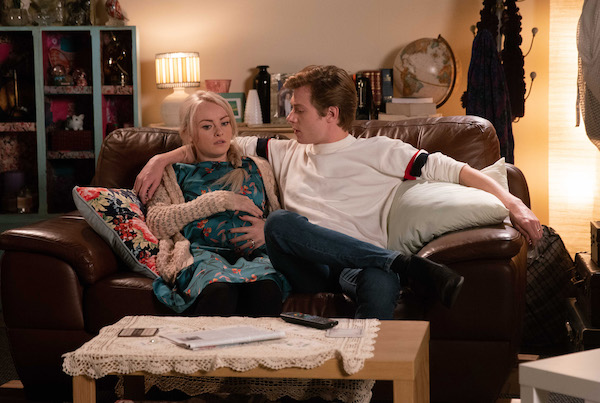 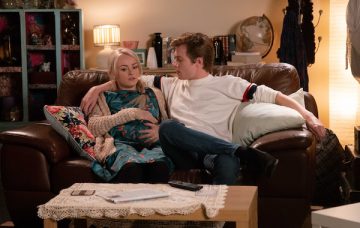 Will she see sense?

Sinead Osbourne and her cancer battle has broken a nation of Corrie viewers’ hearts, but they’re starting to get a little cross that she’s refusing treatment.

And her lies are about to catch up with her next week when she finally finds the burden she’s carrying too much and confesses everything.

The mum-to-be is determined to put the life of her unborn baby first over her own, but has been lying to husband Daniel that she’s been attending her chemo sessions.

He’s blissfully unaware that Sinead has taken the advice of her new friend, Steff, and has ditched traditional medicine for complementary therapies and a plant-based diet.

Daniel, and everyone else around her, thinks she’s doing these other things as extra precautions – Ken’s even secretly paying for them.

Sinead believes it’s the insurance at Underworld that is covering the cost, so when she sees her father-in-law hand an envelope full of cash over to Carla, she’s suspicious.

Her investigation into what’s going on is put on hold though, as she and Daniel attend a baby scan and return to the street happy and excited.

When Daniel feels the baby kick later on, he tells his wife he’s the happiest man alive – leaving her feeling incredibly guilty at all the deceitful tactics she’s pulling to hide the fact she’s not having chemo.

Sinead confronts Ken about the money later on and he admits he’s been funding her therapy. She’s touched – but even more guilty – and shows him the scan photo of his grandchild.

When Daniel wants to go to her chemo appointment with her the next day, she starts to panic, and snaps at him before going alone.

Of course she’s not going to the hospital, but it’s all getting a bit too much and when Billy spots her, he asks if everything’s OK.

The weight of everything bearing heavily on her, Sinead asks him if they can pray together.

Billy takes her to his flat and totally consumed with guilt, Sinead blurts out the truth that she’s not been attending chemo.

Bound by the rules of the church to keep her secret, can Billy persuade Sinead she needs to be honest with Daniel? And more importantly, can anyone make her see she needs to have the medical treatment to save her life?

The week doesn’t end there for Sinead though, when she discovers Steff has been rushed to hospital.

Steff’s husband tells Sinead his wife’s cancer has spread and she only has days to live.

Will this be enough to make Sinead realise Steff’s advice is wrong? And is she in time to make a difference to her own chances of survival?

Should Sinead be honest with Daniel? Leave us a comment on our Facebook page @EntertainmentDailyfix and let us know what you think!

Coronation Street airs Mondays, Wednesday and Fridays at 7.30pm and 8.30pm on ITV.