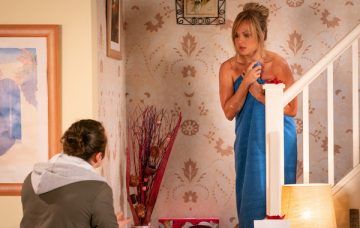 Coronation Street SPOILER: Seb and Sarah get it on?

What will Gary say?

Sarah Platt and Seb Franklin appear to grow closer next week, but could their friendship turn into something more?

Coronation Street fans have seen poor Seb go through a tough time recently, but he thinks his luck is in next week and that romance could be on the cards.

The drama starts when Sarah is struggling to cope with looking after the kids, only to find that little Max has gone missing.

Horrified when she can’t find him, Sarah starts to panic. But thankfully for her, Seb comes to the rescue and returns Max home after finding him at the tram station.

Sarah is so grateful to Seb for being her knight in shining armour that she promises to ask Gary if he will give him his job back at the builder’s yard.

Seb is thrilled and can’t help but have a soft sport for Sarah… but could it soon turn into something more?

When Sarah manages to get Seb is job back, he’s chuffed. But his infatuation with her only gets deeper when she finds out that Gary is paying Seb a reduced wage and she insists that he pay Seb the same as everyone else.

As Seb looks at Sarah wistfully, it is clear that he is falling for her… but is the feeling mutual?

When Seb’s 18th birthday arrives he’s convinced no one has remembered, but secretly Eileen and Faye have planned a surprise party.

Still in the dark about his birthday celebrations, Seb is thrilled when he sees Sarah arguing with Gary, and later he thinks all his birthdays have come at once when Sarah hints that she has got a surprise for him.

Desperate to get rid of Seb while she organises his party, Eileen fibs that Sarah is looking for him just to get him out of the house… but when he gets to Sarah’s house he is surprised to find the front door open.

As he lets himself in he is shocked to find a note from Sarah saying ‘In the bath, waiting for you!’ – and Seb can’t believe his luck.

As he heads upstairs, Seb can’t wait to see what his birthday surprise might be… but what does Sarah have planned?

When the birthday boy later arrives at his birthday party, he keeps quiet about what happened at number 8… but what went on with Sarah?

And does Gary know about what happened between his girlfriend and his employee?

What do you think is on the cards for Seb and Sarah? Leave us a comment on our Facebook page @EntertainmentDailyFix and let us know what you think!