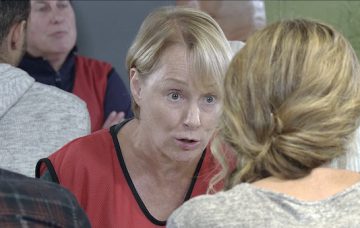 Sally Metcalfe will finally be vindicated in emotional scenes to come in Coronation Street.

Duncan Radfield’s web of lies will be torn apart when a shocking fact comes to light, which exposes him for exactly what he is – a shady conman intent on bringing Sally down.

In shocking scenes this November, Sally was found guilty of fraud, money laundering and bribery and sentenced to four years in prison.

Viewers know she is innocent of the crimes, after being set up by slimy snake Duncan.

Even Sally’s own sister Gina (boo, hiss) and husband Tim have been left doubting her.

However, fans will get their happy(ish) ending in the New Year when Sally is eventually freed from jail after new evidence comes to light.

According to The Sun, Tim and Gina make a major discovery which makes the case against Sally fall apart.

Duncan’s ‘dead’ wife May is actually ALIVE and is living in Costa Rica after receiving the £40,000 stolen money that Duncan has secretly wired to her.

The evidence is enough to prove Duncan has been lying all along and leads to Sally’s release.

The former Mayor of Weatherfield returns to Weatherfield, albeit a changed woman for the experience.

But will Sally be able to forgive the doubters?

Duncan’s pack of lies bears more than a passing resemblance to the true story of John Darwin, who faked his own death in a canoeing accident in 2002.

He infamously relocated to Panama with his wife in a story that shocked the nation.

An insider told the newspaper: “Corrie’s writers seem to have read up on John Darwin and written a similar story for the soap.

“Just like John’s fake death and eventual appearance in Panama, Duncan’s wife May ends up in somewhat similar circumstances.

Don’t worry Duncan, Sally has been keeping your cell warm in prison!

Should Duncan go to jail? Leave us a comment on our Facebook page @EntertainmentDailyFix and let us know what you think!