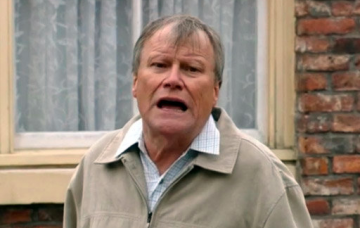 Just when you think you've heard it all...

Coronation Street fans will be left shocked next week when cobbles legend Roy Cropper is accused of engaging in lewd conduct with newcomer Evelyn Plummer.

Evelyn spends the night searching for her beloved dog Cerberus after he went missing thanks to Fiz Stape’s troublesome daughter, Hope.

Roy helps the newcomer in her moment of need, knowing that she is desperate to find out what has happened to her beloved canine friend.

But when the pair search the woods one evening and wake the following morning still in the car, the pair are in for the shock of their lives as there’s a knock at the window.

Roy is mortified at the accusation and thankfully is let off with just a warning… phew, that could have been very embarrassing.

Later on, Tyrone joins the pair in their search for the pooch, and it isn’t long before they spot a man out walking Cerberus and follow him home.

But when Evelyn demands he gives her dog back, the man just laughs in her face, asking her to prove that the pet really belongs to her.

With no proof that Cerberus is her dog, Evelyn is at a loss and decides she needs to come up with another plan if she wants to get her furry friend back.

Resorting to desperate measures Evelyn, Tyrone and Roy attempt to break into the dog thief’s back garden, thinking they can get Cerberus back without him knowing.

Unfortunately for the trio, it’s not that simple, and the man who has stolen Evelyn’s dog catches them in the act and calls the police.

With Roy in trouble with the men in blue twice in the same day, how is he going to manage to explain his way out of this one?

And will troublemaker Evelyn ever get her dog back?

Do you think Roy and Evelyn could make a good couple? Leave us a comment on our Facebook page @EntertainmentDailyFix and let us know what you think!