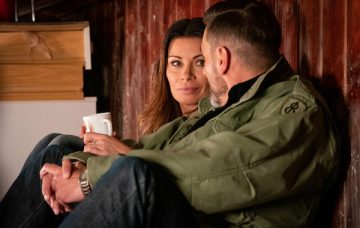 Peter Barlow and Carla Connor grow closer on New Year’s Eve, hinting that they could be getting back together. But with everything that has gone on in their past, can they really make a relationship work?

After throwing all his money into the snooker hall on Victoria Street, Peter Barlow is feeling pretty happy with himself. But when he takes Carla for a look at his new business venture he’s crushed when she admits she thinks it is a money pit.

Carla challenges Peter to a game of snooker, telling him that if she wins he has to pull out of the snooker hall deal, but if he wins he gets to give the new business a go.

But the former couple’s game of snooker is more pleasure than business as they flirt up a storm, reliving their past together and the happier times they shared.

It is clear the chemistry is very much alive between them even after all this time… but will they decide to give things another go?

It seems that Carla must be better at snooker than we thought, because Peter is later seen telling Ken and Simon that he has decided to pull out of the snooker hall deal after all.

But it doesn’t look like he’s going to have much time to ponder over whether he’s made the right decision because a delivery man comes knocking at Number One with a boat delivery!

While Ken wonders who could have bought his son such an extravagant gift, Peter knows exactly who it is from… Carla.

As Peter thanks his ex for the gift, Peter tells Simon that the boat will need some serious work doing to it but, once it is up and running, he plans to sail around the Caribbean in it and that he hopes Simon will come with him.

Peter doing one in a boat? We CAN’T COPE!

That would certainly put pay to the rumours Peter and Carla could be headed for another romance.

New Coronation Street boss Iain MacLeod revealed to Digital Spy at a recent press day that the couple could reunite, but it will be later in 2019, not at New Year.

Speaking of what we can expect in 2019 Iain said: “Obviously with what Daniel and Sinead are going through at the moment, that’s going to draw in Peter as the older brother figure.

“Right in the middle of all that is Peter and Carla’s relationship. Peter will be torn between his loyalties to his son, himself and his own dreams for the future – and his love for Carla.

“Carla and Peter make a mature decision on new Year’s Eve that maybe their relationship is going to be forever doomed to fail and they’ll make it work as just friends. But then the factory collapse tips Carla’s life into its lowest ever ebb.

“Peter reaches a fork in the road. He has to choose between his son, his future, and whether he sticks around and helps Carla out of this hole that she has dug for herself.

“I’ll leave you to guess which choice he makes, but obviously it will put him at massive odds with his family.”

Do you think Peter and Carla are better together or apart? Leave us a comment on our Facebook page @EntertainmentDailyFix and let us know what you think!