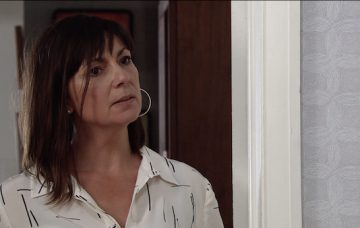 Back on the cobbles after a couple of months away - but for what reason?

Paula Martin is heading back to Coronation Street.

Actress Stirling Gallacher is returning to the soap as lawyer Paula and she looks set to resume her romance with Sophie Webster.

Revealing the news on Twitter, Stirling posted a picture of herself with actress Brooke Vincent.

Posting a video of the onscreen couple, she wrote: “I have had the absolute and total pleasure of goofing about with this dreamboat all day.”

Fans noticed the post and became very excited at the prospect of Paula and Sophie getting back together.

One said: “Yay, it’s been to long since we last saw you both together! Looking forward to seeing you back on the cobbles.”

A second said: “The pair of you are amazing and us fans so want Saula back together.”

I have had the absolute and total pleasure of goofing about with this dreamboat all day.
⁦@BrookeLVincent⁩ pic.twitter.com/GdiMFyqA4B

The solicitor was last seen in January at Sally Metcalfe’s fraud trial release before refusing to help her family appeal the conviction despite Sally’s innocence.

Tristan Gemmill let the cat out of the bag earlier this week about the shock return.

He tweeted the news of Paula’s comeback and hinted she would be helping his character Robert Preston with some legal trouble.

“Finally had a scene with @wirlygallacher today!” he wrote on the social network.

“The Gloucestershire Posse is stealthily taking over @itvcorrie!!”

Robert is one of the official suspects for the Underworld factory collapse after publicly vowing to destroy Carla Connor for ruining his relationship with Michelle Connor.

Could he hire Paula as his solicitor to help him escape from a prison sentence?

She didn’t exactly have the best track record helping Sally who would still be languishing in prison if the family had taken her legal advice.

Or could Robert be in a messy legal battle over the Bistro with ex Michelle Connor?

Are you happy Stirling is back? Leave us a comment on our Facebook page @EntertainmentDailyFix and let us know what you think!