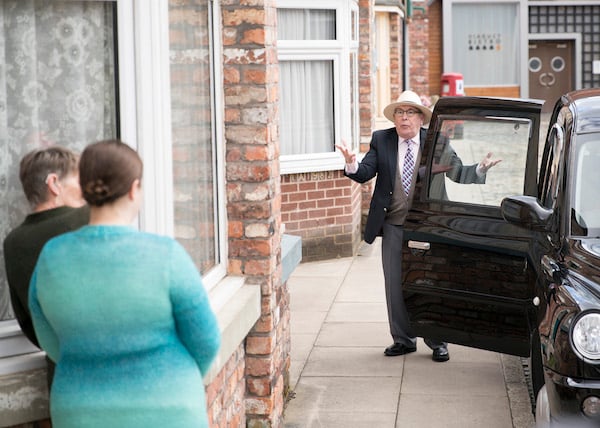 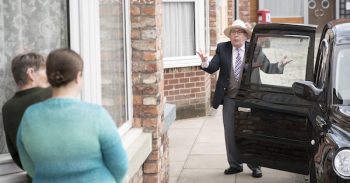 Norris Cole arrives back on the cobbles next week, but it soon becomes clear that he is harbouring a huge secret that is set to rock Mary Taylor’s world.

The wait for Norris’s return is finally over, but his comeback isn’t quite the happy occasion that he was hoping for when Mary finds out he has got a fiancee!

Mary is left fuming when she finds Freda Burgess lurking in Norris’s house later this week, but she is also worried about Norris’s wellbeing when he appears to not be with her.

However, all becomes clear next week when Mary finds Freda showing an estate agent around Number 3, and with still no sign of Norris, the rumour mill goes into overdrive about what has happened to him.

Mary chats to Tracy about where Norris could be, and it’s not long before the pair have come to the conclusion that Freda has done away with Norris and is moving in on his assets!

Mary dashes to Number 3 to confront Freda and her suspicions seem to be confirmed when she spots the urn and immediately fears the worst.

Horrified, she runs out of the house, followed by a bemused Freda… but before the truth can be revealed, a car pulls up and out steps Norris.

Mary is left shocked to the core when Norris reveals he is engaged to Freda and has come back to Coronation Street to ask her for a divorce – but will she agree?

Mary is instantly suspicious and accuses Freda of being a gold digger… especially when she claps eyes on a beautiful diamond bracelet on her wrist.

With Mary refusing to divorce Norris while she doesn’t trust Freda, the pair come to blows over their marriage. But soon they have more to argue about when Norris’s return unearths a life-changing bombshell…

After clearing Norris’s house, Freda finds some letters addressed to Mary, and quickly shows them to Rita.

Rita is shocked to find that the letters are from Brendan Finch, the editor of The Inexplicable, who had a fling with Mary while he was married to someone else.

But after reading the letters, Rita realises that Brendan is clearly still in love with Mary and there’s even an engagement ring in one of the envelopes…

How will Mary react to the news someone has sent her a proposal via Royal Mail and Norris has been keeping it a secret from her?

Mary is thrilled that her love life is finally looking up and leaves a message on Brendan’s phone, explaining the reason she hasn’t responded to his proposal is because of Norris’s interference.

She’s beyond excited when Brendan texts and asks her to meet up… could this be the start of a new romance for Mary?

Are you pleased to see Norris back? Leave us a comment on our Facebook page @EntertainmentDailyFix and let us know what you think!