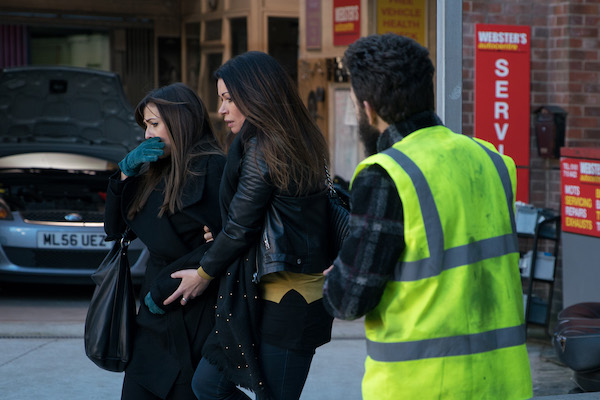 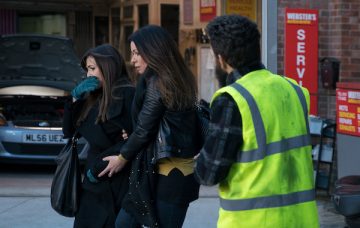 Is she in the family way?

Michelle Connor thinks that she might be pregnant next week, but a fluke accident leaves her fearing the worst about her unborn baby.

Coronation Street fans will know that Michelle has taken a long time to come around to the idea of having a baby after losing her son Ruairi after he was born at just 23 weeks back in 2017.

But after reluctantly coming around to Robert Preston’s idea that they should have a baby of their own, Michelle wonders if she could be pregnant next week.

The pair excitedly agree to do a pregnancy test together later in the day – but before they can meet up to take the test, disaster strikes when Michelle is involved in an accident.

While she is talking to Carla Connor on the steps of the factory about how she thinks she could be in the family way, Michelle finds herself hit hard in the stomach with a football that is kicked by one of the builders.

Carla rushes her friend to the medical centre to get checked out, and it doesn’t take long for Michelle to be seen by the doctor.

The GP does a pregnancy test and tells Michelle that it was negative… but how will Michelle react to the news that she wasn’t pregnant after all?

News about the football incident gets back to Robert and he is fuming that Michelle and their baby were put in potential danger, and even builder Anton turning up with flowers for Michelle isn’t enough to calm him down.

Michelle breaks the news to Robert that she actually wasn’t pregnant after all, but how will he feel when his dreams of being a father are crushed once again?

With their relationship strained after what happened with the false pregnancy, Robert and Michelle argue, with Robert convinced that Carla is stirring things up between them both.

Robert is fuming with Carla, convinced that she has got something to do with the fact him and Michelle aren’t getting on, and tells the factory owner to watch her back.

But is he lashing out at Carla because of the disappointment that Michelle isn’t having his baby?

Or is there more to his anger than meets the eye?

Do you think Michelle and Robert would make good parents? Leave us a comment on our Facebook page @EntertainmentDailyFix and let us know what you think!