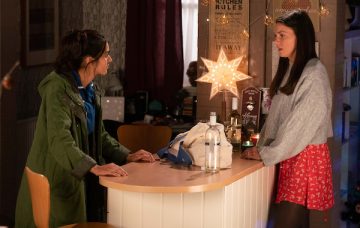 There’s drama heading for Coronation Street next week when Rana Nazir finds out fiancee Kate Connor has been getting frisky with Adam Barlow. Is their wedding off already?

Kate is fuming when Rana drops the bombshell that she doesn’t want to have a baby after all, confessing she had got swept up in Kate’s enthusiasm for having a family.

But things don’t get any better when, after the pair have a blazing row, Kate is at the Bistro being forced to listen to Michelle going on about her and Robert’s baby plans.

Biting her tongue, Kate can’t get out of there quick enough, and heads over to Adam’s office instead to tell him that her deal with Robert is now off.

Adam is sympathetic and cracks open a bottle of scotch – but as grateful Kate starts to see Adam in a new light, it is clear that she is plotting another baby plan as she drinks.

Fulled by the alcohol, Kate sets about seducing Adam into kissing her passionately. But while innocent Adam thinks his luck is in, Kate has clearly got other things on her mind as they get frisky.

Later at their flat, Rana tells Kate that she doesn’t want to break up just because she isn’t ready to have a family – oblivious to what the woman she is planning to marry has just been getting up to.

And it doesn’t take long before Rana finds out everything after Alya lets slip that she saw Kate and Adam getting it on at the solicitors’ office.

A heartbroken Rana confronts Kate and she very quickly realises that what Alya has told her is true…  leading her to end their relationship on the spot.

Totally betrayed, Rana goes to see Adam to have it out with him, and after telling him exactly what she thinks of his morals, she reluctantly agrees to go and see Kate.

But any hopes Kate might have for a reunion are dashed when all Rana does is confirm their engagement is definitely off.

As Alya comforts Rana in her moment of need, Johnny is upset to hear that his daughter’s wedding is off and invites her to come and live at the Rovers.

Read more: Coronation Street’s Kate and Rana: A history of their relationship

But is this really the end for ‘Kana’? Or can Kate pull something out of the bag that will help her win Rana back?