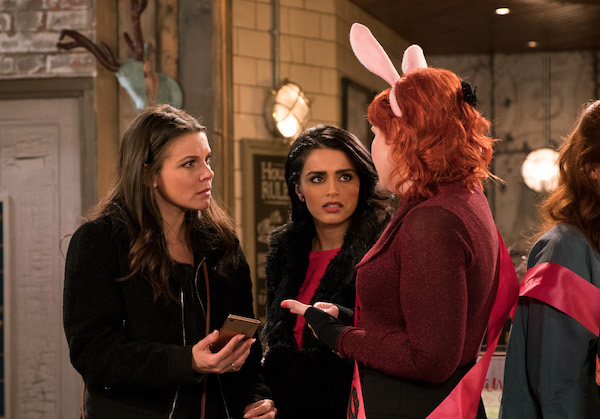 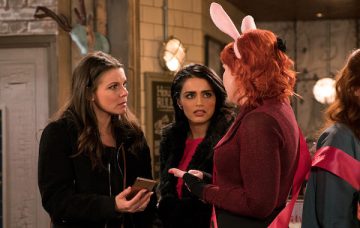 Is the Weatherfield wedding of the year about to be called off?

Kate Connor and Rana Habeeb’s wedding is just around the corner, but after a cheating scandal hits their hen night, could the nuptials be called off?

Ever since Rana and Kate were reunited at New Year, there has been wedding fever on the cobbles.

But with the arrival of Kate’s old friend Lolly recently, Rana has found herself increasingly pushed out of her own wedding plans.

Next week sees Rana’s suspicions about Lolly confirmed when she goes against the brides-to-be’s wishes and books a stripper for the hen night.

The pair are less than impressed with the fact Lolly has booked a male strip club for their night of celebrations, and tell her she needs to try harder.

When Kate’s friend then announces she has instead organised a drag queen for the hen night, Kate and Rana are again not overly keen but agree to a small bash at the Bistro as a compromise.

But of course, this is Lolly we’re talking about, and Kate and Rana are fuming when they discover that she has gone totally against their wishes and booked a stripper for the night.

Struggling to get a moment of calm amidst the hen night planning, Rana takes Kate to the factory after hours with a blindfold on, desperate to surprise her with the bespoke wedding dress she has made for her.

Kate is thrilled by the beautiful dress and the couple share a moment of happiness together… a moment that is later totally shattered once again by an interfering Lolly.

When Kate’s friend sneers at where they have been, Rana sees red and sends Lolly packing, but is this a decision she will live to regret?

As the hen night gets underway, Lolly makes sure she is centre of attention, despite the fact she isn’t the one getting married.

But as Kate laughs about how desperate she is to impress, Lolly overhears everything and dashes to the toilets upset.

Rana is desperate for their big night to be drama-free and follows Lolly to try and smooth things over, but it seems her attempts to help backfire massively.

When Rana tells Kate the following day that she doesn’t want Lolly at the wedding, Kate agrees and the pair invite her to Speed Daal to break the news.

But of course Lolly isn’t going to take the news she has been un-invited to the wedding well and immediately accuses Rana of making a pass at her at the hen night.

A huge fight breaks out between the women as Lolly accuses Rana of having feelings for her… but thankfully Kate doesn’t believe a word and Lolly is given her marching orders.

Unfortunately that’s not the end of the drama for the couple… because later on Lolly manages to sweet-talk Craig into letting her inside Kate and Rana’s flat when they’re not there.

But what revenge does she have planned?

What do you think Lolly has planned for the pair? Leave us a comment on our Facebook page @EntertainmentDailyFix and let us know what you think!