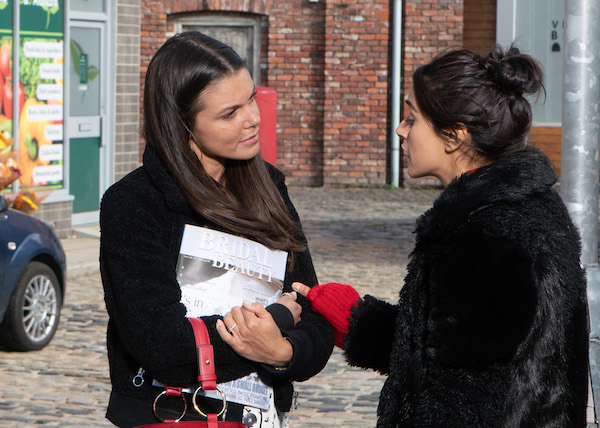 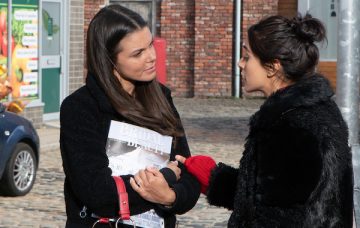 Coronation Street SPOILER: Kate and Rana disagree over having a baby

Kate Connor and Rana Nazir have a busy week next week when they get engaged and start planning for a family.

But only one of them is on board with the baby plan – Kate is desperate to set the wheels in motion and makes an appointment to discuss IVF. Rana isn’t so keen though – could their wedding plans be ruined before they’ve even set a date?

Rana’s been on a cruise with her mum, and when she returns Kate’s going to propose – but she has no idea Rana’s planning the same thing!

The girls are reunited in the pub and both produce ring boxes at the same time.

Getting down on one knee together (they’re so in sync, it’s so cute!) they swap rings and agree to get married.

Kate’s family are thrilled, and Johnny and Jenny throw an engagement party to celebrate having some happy news for once.

But obviously a happy ending never lasts long in Weatherfield and when Kate makes a speech, her words flaw Rana.

Kate tells everyone she thinks Rana will make an excellent mother and the look on Rana’s face says it all.

Fortunately, Kate doesn’t clock it, but Rana’s brother Imran does and corners his sister. He tells her she has to be honest with Kate now before it’s too late.

Heeding his words, Rana proceeds to do precisely nothing about it.

The next day, Kate gets stuck into research – both on weddings and babies.

Oblivious to Rana’s true feelings, Kate even books an appointment with Dr Gaddas to find out about IVF and their different options.

Rana tries to stall her, but at some point she’s going to have to come clean. Can she bring herself to admit the truth?

Recent rumours have suggested Robert Preston will end up fathering the girls’ baby.  According to a report in The Sun Robert is desperate to become a dad, but Michelle tells him she’s done with having kids.

When he hears Kate and Rana’s need for a sperm donor, he considers offering himself up – but only if he remains anonymous – quite a tall order in Soapland!

Should Kate and Rana have a baby? Leave us a comment on our Facebook page @EntertainmentDailyFix to let us know what you think!