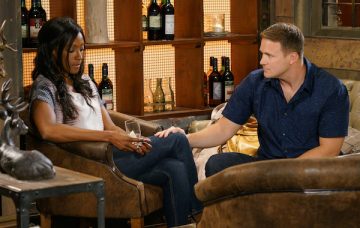 Coronation Street: Jude and Angie to split for good?

Coronation Street couple Jude and Angie Appleton have been on the rocks ever since Angie found out her husband had been lying about his profession.

For years Jude claimed to be a marine biologist, however his mother Mary and her friend Tracy caught him working behind the aquarium’s gift shop counter.

And once Angie found out, she felt understandably betrayed… and then ended up kissing Adam Barlow.

She reluctantly agreed to give their marriage another go, after being cornered into a vow renewal, but things are definitely not right between them.

And they aren’t likely to be any time soon, as Jude is hiding another secret that’s just waiting to come out.

A few weeks ago, viewers saw Roy Cropper suffer from an allergic reaction from a sting. Dr Ali Neeson administrated the epi-pen, which saved Roy’s life, before dashing off to get more help. When Roy came around he only saw Jude there, and assumed he had been the one to save him.

Jude was only too happy to let Roy – and Angie – believe he saved the cafe owner. He also decided that he wanted to train to be a paramedic after the incident.

And if/when his wife finds out about his scam, there would/will be hell to pay…

Actress Victoria Ekanoye who plays Angie told ITV: “I think if she found out he was lying again there wouldn’t be any way back.

“I think that would be the end for Angie, everybody makes mistakes and there are certain things you can forgive.

“But I think if she found out he was lying again there wouldn’t be any way back.”

Jude’s lies would also affect Mary – if not more than Angie.

“Mary still has her rose-tinted glasses on” Victoria added.

We will soon see Jude’s dark side with Mary due to find out Jude walked out of his entrance exam next week.

But will it spell the end of yet another relationship on the street?