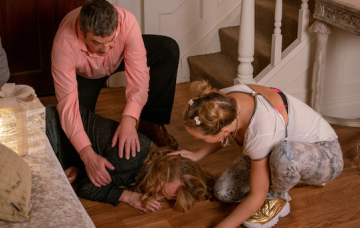 Drunk Jenny takes a tumble, but will she be okay?

Jenny Connor’s drinking leaves her in danger next week as she takes a dramatic tumble down the stairs. Will she be okay?

Coronation Street fans will have seen that Jenny is a woman on a mission at the moment, desperately trying to prove that her husband Johnny is still sneaking around with ex fling Liz McDonald.

But as she tracks their every move on a handy app she put on Liz’s phone, she is turning herself into a nervous wreck as she tries to prove her fears are right.

Turning to booze to steady her nerves, Jenny’s life has started to spiral out of control, and next week sees her erratic behaviour get even more bizarre when she catches Johnny and Liz together.

After Liz gets a call from the police with information about Hannah and Jim, she turns to Johnny for support and asks for a lift to the police station.

But while their actions might be purely innocent, Jenny confronts her husband and the pair end up having a huge fight.

As Jenny hits the bottle to numb her pain, she wakes the next morning with a hangover, and despite Johnny trying to build bridges by inviting her out for lunch so they can spend time together, she just ends up giving him another ear bashing.

Clearly a woman on the edge, Jenny knocks back more wine. But when she then drunkenly smacks herself in the face with a cupboard, it’s evident her drinking is starting to get out of control.

As Jenny plots yet more misery for Liz after spotting a DVD from an escort service, Johnny is oblivious to what is going on and is more concerned about his wife’s black eye from the cupboard incident.

But Johnny isn’t the only one who is worried – Gemma has also noticed Jenny’s injuries and is getting suspicious.

But as Jenny and Johnny fight over the fact Johnny is offering Liz support in her moment of need, Jenny takes a step backwards and tumbles down the stairs.

Will she be okay, or has her erratic behaviour and out-of-control drinking finally taken their toll?

Do you think Jenny is right to worry about Johnny and Liz’s relationship? Leave us a comment on our Facebook page @EntertainmentDailyFix and let us know what you think!