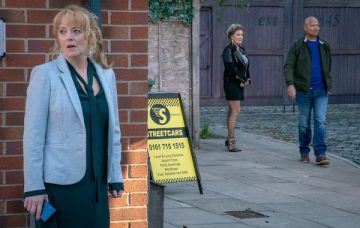 Jealous Jenny's got revenge on her mind...

Despite the fact she is tracking her every move thanks to a fancy app on her phone, Jenny Connor is STILL convinced that Liz McDonald is sharing secret rendezvous with her husband Johnny.

After discovering the pair had a steamy affair earlier this year following Aidan Connor’s tragic death, it’s not that surprising that Jenny is convinced her husband might be playing away once again.

But while Johnny and Liz are just friends these days, Jenny is a woman on a mission to prove that the pair are sharing secret hook ups.

After putting a tracking app on her phone, Jenny knows everything Liz does. But when Liz asks Jenny if she can slip out of work for an hour next week, alarm bells start to ring for the Rovers landlady.

Convinced ‘slipping out’ is code for ‘meeting up with your husband behind your back’ Jenny is convinced Liz is going to meet Johnny.

But Jenny couldn’t be further from the truth, and she’s thrilled when she follows Liz on her app and sees she’s actually meeting up with her ex, Mike Thornberry, who has invited her out for dinner.

As the former couple share a kiss in the street, you’d think this would be enough for Jenny to realise that Liz doesn’t have designs on Johnny any more.

But will she give up her vendetta against Liz that easily?

After organising to go on holiday together, Liz and Eileen plan a dinner together to sort out the finer details of their adventure. But having been asked out by Mike on the same evening, Liz cancels on Eileen, lying that she’s not well.

But when Eileen then comes into the pub later that day and tells Jenny that Liz is under the weather, the jealous landlady instantly thinks of a way to stir up trouble for her love rival.

As Eileen arrives, Liz thankfully sees her in the nick of time and dives under the table. But was she quick enough, or will Eileen work out what’s going on?

What do you make of  Jenny’s obsession with Liz? Leave us a comment on our Facebook page @EntertainmentDailyFix