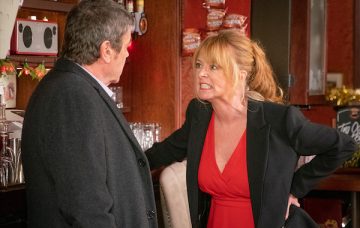 Have her worst fears been confirmed?

Jenny Connor is convinced her fears that husband Johnny is still sneaking around with Liz McDonald have been confirmed next week when she sees they are together on her phone app.

Paranoid Jenny’s grip on reality has been starting to slip over recent weeks and she becomes increasingly more convinced that Johnny and Liz have rekindled the forbidden romance they shared this summer.

And with her tracking app showing Liz’s every move, the Rover’s landlady has become obsessed with seeing where her love rival and husband are at all times.

When Johnny leaves for an appointment with the brewery next week, suspicious Jenny tracks Liz and is horrified when she sees the pair are together.

But while she is convinced this is the proof she needs that their romance is back on, the whole thing is actually entirely innocent.

Liz is shocked when she gets a call from the police about Hannah and Jim, and she begs Jim to give her a lift to the police station, which he reluctantly agrees to do.

Jenny angrily confronts her husband, lying that she saw the pair drive off together – but will she believe him when he claims he’s innocent?

The pair have a furious row, leading to Jenny leaving and heading to a hotel room alone.

There she hits the bottle to numb her pain, a pain that is only increased when she sees on her app that Johnny and Liz are together yet again.

While the meet up is purely to discuss Hannah and Jim, Jenny immediately thinks the worst and the next day she wakes with a hangover from hell.

Johnny is worried about his wife after she stayed out all night at the hotel, and tries to build bridges by inviting her out for lunch.

But Jenny isn’t having any of it and instead ends up giving him a piece of her mind.

Later in the week Jenny is once again knocking back the wine and indulging in her new favourite pastime – stalking Liz on her app – when she accidentally smacks herself in the face with a cupboard door.

Clearly her drinking is starting to get out of hand, something that Johnny worries about when he sees her black eye.

But Jenny has more pressing matters to attend to than her injuries, and she sets about scheming against Liz yet again like a woman possessed.

This time she sees a DVD from an escort agency and comes up with a plan. What has she plotted against the Rover’s barmaid this time?

Stirring up trouble, Jenny then suggests that Johnny should go with Liz to the police station when she is called in to talk about Hannah and Jim again… but why is she now forcing the pair to spend more time together?

Gemma is worried when she notices the tension between the couple and, as Jenny and Johnny fight about the time Johnny is spending with Liz, Jenny takes a step backwards and tumbles down the stairs.

Will Jenny survive to tell the tale?

Do you think Jenny is right to be suspicious about Johnny and Liz? Leave us a comment on our Facebook page @EntertainmentDailyFix