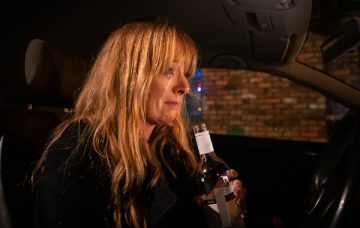 Is it all over for the king and queen of the Rovers?

It looks like Christmas could mark the end of the line for Jenny and Johnny Connor as the pair clash over Liz McDonald with devastating consequences.

Jenny and Johnny’s marriage has never been the same since Johnny’s affair with Liz.

And while it could be argued that Johnny wasn’t in his right mind following the tragic death of his son, Aidan, it seems Jenny understandably can’t get her husband’s infidelity out of her mind.

Recent weeks have seen Jenny continue to struggle with the fact Johnny and Liz are now working together at the Rovers… and she’s been hitting the bottle to numb the pain of seeing them in such close proximity.

The pub landlady has even been tracking the pair on her phone, convinced she is going to catch them up to no good together.

But as Christmas arrives, Jenny’s drinking spirals out of control – so much so that Gemma Winter even thinks that Johnny has been hitting his wife thanks to all the bruises Jenny has acquired through drunken injuries.

When Jenny finds out that Liz’s holiday with Eileen has been cancelled, Jenny downs wine once again, knowing this means her love-rival will be around over the festive season.

But her drinking is soon noticed by Johnny, and as the Rovers’ Christmas Eve quiz gets underway, Jenny is getting increasingly louder, and her husband isnt happy.

Johnny snaps at Jenny about her drunken antics, leading to her rushing out – only for Gemma to follow and ask her outright if Johnny is hitting her.

Jenny laughs at the accusations, but it is clear that Gemma doesnt believe a word when she denies everything.

Christmas Day gets off to a surprisingly peaceful start for Johnny and Jenny – and as Johnny declares his love for his wife, Jenny can’t help but hope that this could be a happy day for them after all.

But of course, this is Weatherfield, and by the end of the day things have descended into chaos.

When Johnny compliments Liz just moments after announcing his love for Jenny, Jenny sees red and meddles in Liz’s life once again.

Secretly sending a text in a fit of rage, it soon becomes apparent that Jenny has messaged Mike, pretending to be Liz.

When Mike arrives at the Rovers, Liz is fuming with Jenny and tears strips off her for texting Mike and leading him on… but Jenny doesn’t care until Johnny gets involved and the pair start fighting over Liz once again.

With World War 3 breaking out at the pub, Jenny then drops another bombshell – revealing to Liz and Johnny that she has been tracking their every move on her phone because she doesn’t trust them.

As you can imagine, this news doesn’t go down well and as the arguing escalates, Jenny grabs another bottle of wine (it’s a good job she lives in a pub, or this could get expensive!) and marches out.

It was hinted last month that Liz is set to be left fighting for her life this Christmas after she is mown down by a car.

At first people suspect Johnny is the culprit, but soon all eyes are on scorned wife Jenny after she struggles to cope with Liz’s continuous presence in her life.

Could this be the moment the accident happens on Christmas Day?

Do you think Johnny and Jenny are better off apart? Leave us a comment on our Facebook page @EntertainmentDailyFix and let us know what you think!