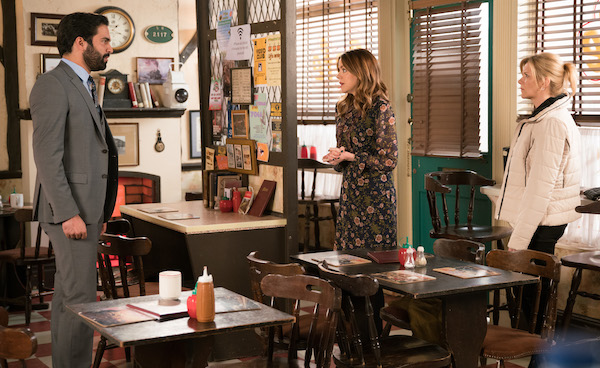 Is this the end of the road for the couple?

Toyah Battersby finds herself single once again after boyfriend Imran Habeeb overhears her secret conversation with sister Leanne in next week’s Coronation Street.

It’s been a rollercoaster ride for Toyah as she has been there to pick up the pieces for boyfriend Imran after his sister, Rana, was tragically killed on her wedding day in the Underworld factory roof collapse.

But it seems that despite the fact she has been there for Imran through thick and thin recently, that’s not enough for the solicitor when he hears Toyah bad mouthing him to Leanne.

Next week sees Toyah confiding in Leanne about how hard it has been to live with Imran since Rana’s death.

But while Toyah might think they’re having a private chat, she soon learns the hard way that if you don’t want people to overhear your conversations, don’t have a deep and meaningful in the middle of Roy’s Rolls!

Toyah is horrified that Imran has heard everything that she was saying to her sister and realises she has got some damage control to do – and quickly.

Heading home to face the music, Toyah apologises to Imran. But he’s not having any of it and tells her that she’s made her feelings quite clear and ends their relationship then and there.

Toyah is gutted that her carelessness has caused her romance to end, and Leanne is worried when her sibling seems in a bad way.

Realising that she can help, Leanne invites Toyah to move in with her and Nick, something that doesn’t go down too well at home.

Nick is fuming to have Toyah under the same roof as him and makes it very clear that he doesnt trust her as she starts making herself at home.

But as the net closes in on Nick as people carry on digging into what happened the day the factory roof collapsed, it seems Toyah is in prime location to watch Nick’s every move.

Is she about to catch him out?

Do you think Imran and Toyah made a good couple? Leave us a comment on our Facebook page @EntertainmentDailyFix and let us know what you think!