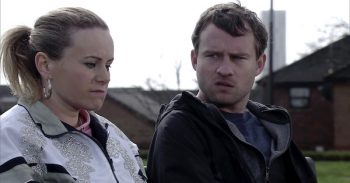 Is this the end of Gemma and Chesney?

Gemma Winter makes the huge decision to leave Coronation Street next week, but will she tell Chesney Brown about her pregnancy before she goes?

Coronation Street fans have seen Chesney’s relationship with Gemma put to the test over recent weeks, with the pair clashing more than ever.

But the ultimate test will come when Gemma finds out she is pregnant with Chesney’s baby this week… but it’s not the happy moment that it should be when the pair end up fighting once again.

With Chesney still in the dark about the fact he is set to be a dad again, Gemma is struggling with her pregnancy alone.

And with her morning sickness making her miserable, the mum-to-be quits her job at Prima Donner next week as the smell of the kebab meat makes her sick.

But when she arrives at the Rovers, she is feeling teary over Chesney, so Ryan takes pity on her and guides her to the back room for a heart-to-heart.

As Gemma tells Ryan that she misses Chesney, he offers her a shoulder to cry on and tells her that she should talk to Chesney and try to give their romance another go.

But as Gemma and Ryan emerge from the back of the pub, Chesney sees the pair and jumps to the wrong conclusion.

He confronts Gemma about what she has been up to with Ryan, leaving her mortified that he thinks so little of her and, deeply hurt, she dashes out of the pub.

Chesney realises that he got totally the wrong end of the stick and kicks himself for being so judgemental… but has the damage already been done?

After their conflict in the Rovers, Gemma is more determined than ever to make sure Chesney doesn’t find out about the baby and announces that she is going to leave the cobbles and live with her mum.

As she gets ready to leave, Paul desperately tries to get Gemma to see sense and stay put, telling her that there are plenty of people in Coronation Street who love her.

But will he manage to get through to his sister?

Just as the pair are talking, Chesney pulls up in his car and tells her that he wants to be part of the baby’s life… but how did he find out about her pregnancy?

And will it be enough to make Gemma stay in Weatherfield, or is it too little, too late?

Do you think Gemma and Chesney belong together? Leave us a comment on our Facebook page @EntertainmentDailyFix and let us know what you think!