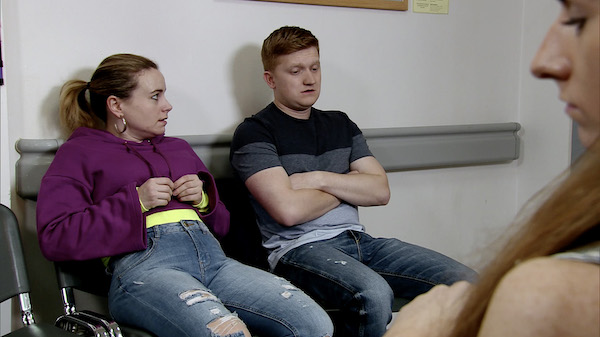 Coronation Street SPOILER: Gemma has her scan and sells her story to the press?

What will Chesney make of it all?

There’s tension between Chesney Brown and Gemma Winter in next week’s Coronation Street when the mum-to-be tries to sell their baby story to the press.

Soap fans have watched the pair struggling to get their heads around the fact they’re expecting quads later this year.

And with Chesney worrying about how he is going to raise the funds to raise four children alongside Joseph, his other little boy, it seems their pair are going to be spending the foreseeable totally strapped for cash.

Read more: Coronation Street’s Gemma to give birth 80ft in the air

But when Gemma goes for her 12 week scan next week, it seems she might have come up with a plan to make some money…

The pair head to the hospital for their routine scan, nervous to know how all four of their babies are doing.

But as they chat about the fact they’re going to be part of a huge family by the end of the year, a lady in the waiting room overhears what they’re saying and tells them they should sell their story to the press.

Chesney is horrified by the idea of using their unborn babies as a way to make money, but Gemma is much more open to the idea and it’s clear she is secretly forming a plan.

As the pair head in for their scan, they’re thrilled when the sonographer confirms that all four babies are doing well.

They’re relieved that all is well with their tribe and come out of the room with huge smiles on their faces, but while they’re getting on well for the time being, that’s all about to change when Gemma goes behind Chesney’s back and talks to the press about her impending birth.

As she meets with a reporter from ‘Hiya!’ magazine, Gemma is excited about what selling her story will bring.

But Chesney’s fuming when he finds out what his ex has been up to and the mum-to-be is forced to apologise for trying to make money from their quads.

As she promises not to pull a stunt like that again, Gemma and Chesney get back on track… but will Gemma be able to stick to her word when she releases how lucrative having four babies could be?

Do you think Gemma should sell her story? Leave us a comment on our Facebook page @EntertainmentDailyFix and let us know what you think!