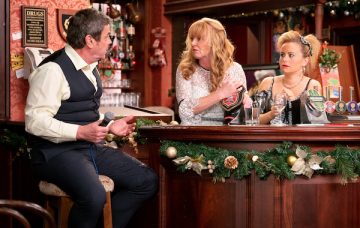 Has Gemma unearthed a dark side to Johnny?

Coronation Street’s Gemma Winter starts to worry that something sinister is going on at the Rovers and accuses Johnny Connor of hitting wife Jenny.

It’s no secret that things have been tough between the landlord and landlady of the pub this year – and with Johnny’s affair with Liz McDonald still playing on her mind, Jenny has recently started to drown her sorrows in a bottle of wine… or three.

But as Jenny’s drinking continues to spiral out of control over the festive season, Gemma starts to get concerned that something is wrong when Jenny begins sporting various bruises.

During a recent argument between the married couple Jenny lost her footing at the top of the stairs and ended up tumbling down.

Gemma was there to help pick up the pieces, but the moment kickstarted her worry that Johnny could have pushed his wife.

Christmas Eve is set to get off to a troubling start when Gemma persuades Jenny to get her injuries  from the stair fall seen to. Everyone is shocked when it is confirmed that Jenny has got a broken rib.

But instead of being worried about her injuries, Jenny is clearly more troubled about the fact that while she is in hospital being checked out, Johnny and Liz have been left alone together to man the bar.

Gemma’s worries are heightened when Rita later lets slip about Johnny’s affair with Liz, and when Jenny is adamant that she doesn’t want to talk about it, it seems that Gemma has put two and two together and got five.

Thinking that she is onto something, Gemma later quizzes Tyrone about his abusive relationship with Kirsty, trying to get information about why Jenny could be covering for her husband.

And to make matters worse, that evening Jenny and Johnny have an almighty row, making Gemma sure that Johnny is abusing his wife.

As the Christmas Eve quiz gets underway Johnny is horrified when Jenny gets drunk and starts being loud. After Johnny snaps at her, Jenny dashes from the bar and out to the back of the pub. Gemma is quick to follow and asks Jenny outright if Johnny is being heavy-handed with her.

Jenny is adamant that Gemma has got the wrong end of the stick – but the barmaid is having none of it and doesn’t believe a word.

On Christmas Day Johnny and Jenny have yet another row over Liz and this time Gemma takes the opportunity to accuse Johnny of physically abusing his wife.

Read more: Coronation Street: Peter Barlow to get it on with Abi Franklin?

But while everyone is left speechless at Gemma’s accusations, Jenny then reveals how she has been tracking Johnny and Liz’s every move on her phone, ending in Jenny grabbing more wine and fleeing the pub.

With Jenny battered and bruised thanks to her continuous drinking, will people start to think that Gemma’s accusations might have some truth in them?

And with him and Jenny always fighting, will Johnny be able to prove he’s innocent?

Do you think Jenny and Johnny can ever be happy? Leave us a comment on our Facebook page @EntertainmentDailyFix and let us know what you think!