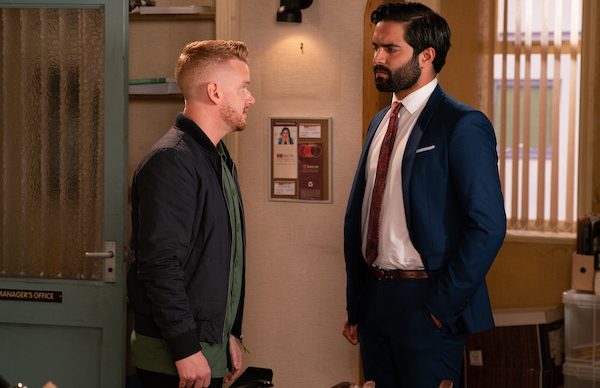 It appears everything is closing in on Gary Windass as the guilt gets too much for him and he confesses to Imran that he sabotaged the factory roof in tonight’s Coronation Street.

Viewers know that Gary is the one who sabotaged the factory roof which ended up putting Sally Metcalfe in hospital and killing Rana Habeeb. On top of that, Gary ended up killing loan shark Rick Neelan a few weeks ago.

Gary thought his Rick problems were solved however, he got a shock when his teenage daughter Kelly showed up demanding to know where her dad is.

As Gary took over Rick’s business, Kelly became suspicious of Gary and demanded more details, not believing he went abroad.

Gary told Kelly the truth that her dad was loan shark but lied telling her he went abroad and that the police were after him.

The builder was also called in for questioning about the factory roof when Nick was seen in a picture taken the morning of the sabotage and Sarah told the police that Carla ‘dreamed’ Gary took her phone after leaving a voicemail.

Viewers know that in the voicemail sent to Sarah he confessed to being the factory roof saboteur as he believed his life was about to end.

In a clip shared on Coronation Street’s Twitter showing a teaser for tonight’s episode, the guilt appears to have got to Gary and he confesses to Imran.

Burdened with guilt, Gary calls at the solicitors’ office to talk to Imran.

Will he take responsibility for Rana’s death? #Corrie pic.twitter.com/j4ePWTyo7N

In the clip, Gary says to Imran: “I have wanted to say something so many times, I really have, I have.

“But how could I? How do you just admit something like that?”

Imran asks if he’s saying what he thinks he is and Gary tells him he isn’t going to lie anymore and Rana is dead because of him.

How will Rana’s brother react to what Gary is saying?