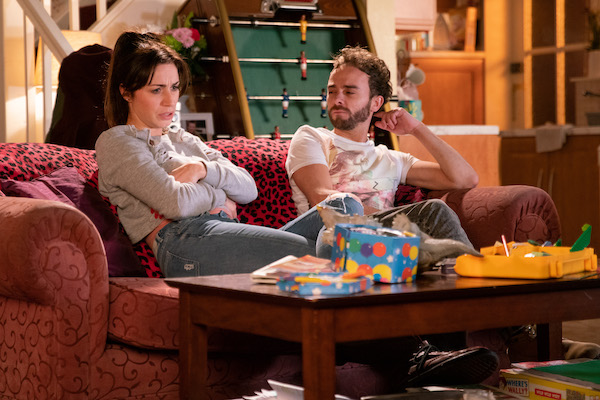 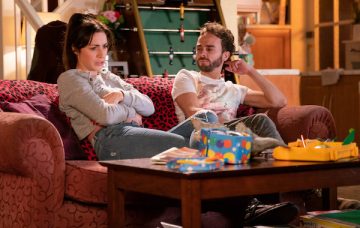 Coronation Street SPOILER: David set to cheat on Shona as Natalie kisses him

We’ve seen it coming for weeks and now Coronation Street has confirmed Natalie will make a play for David Platt next week.

In preview pictures released by the show on their website newcomer Natalie can be seen planting a kiss on David – but will he respond?

Things aren’t going well for David and brother Nick Tilsley with the police breathing down their necks as they try to keep their dodgy dealings a secret.

With Natalie the only other person in the know about Nick taking grandma Audrey’s £80K the boys have given her a job at their barber shop to keep her quiet.

But it seems that’s not enough and Nick urges David to keep her sweet – whatever it takes.

David, as it happens, has taken to Natalie and the pair have been sharing a lot of flirty banter over recent weeks.

So it seems Natalie’s feelings aren’t totally one-sided, but when she makes her move and pulls him in for a kiss, how will David react?

With his brother’s words ringing in his ears, will he kiss her back to keep her sweet? Or will he pull away and stay faithful to Shona?

And if he does reject Natalie, how will she take the knock back? Given what she knows, it seems David’s in a no-win situation.

Cassie Bradley, who plays Natalie, recently confirmed to Entertainment Daily that Natalie would make a play for David.

“I think there are the seeds of a crush there,” she admitted.

“He’s the first person in a long while that’s given her a chance and she admires him for speaking up for her.

“She’s fought for everything her whole life then suddenly she’s got someone in her corner and I think that’s where that seed will develop.”

But will her feelings be reciprocated?

With David and Shona being a popular pairing, fans are already outraged at the idea of Natalie coming between them. And that’s not to mention the fact she helped con soap stalwart Audrey, who many fans felt devastated for.

But Cassie’s hopeful people will see Natalie for the good person she is underneath it all.

“She’s not bad, I think she’s manipulative, I think she’s a chancer, but then she’s not had an easy life, she’s had to live hand to mouth and she takes whatever chances come her way.

“I also think she gets bored quite quickly and she’s looking for excitement.”