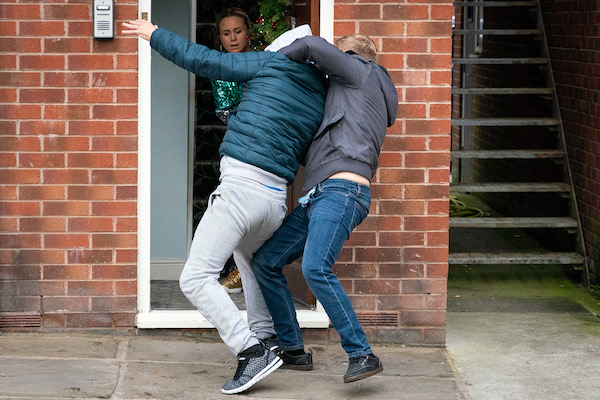 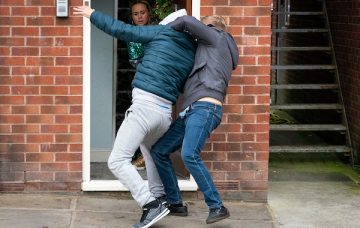 Gemma's in danger, but who is after her?

It looks like Chesney Brown could become Gemma Winter’s knight in shining armour this New Year when she is approached by a hooded figure and Chesney is forced to intervene. But who is the mystery attacker?

After weeks of lusting after Chesney, Emma decides it is time to up her game if she is going to win the kebab shop worker’s affections.

Thinking that if she was a little less Emma and a lot more Gemma then she might be in with a fighting chance, so the hairdresser decides to change her image and dress more like her love rival.

But when Chesney seems Emma in her new ‘Gemma’ look, he is totally thrown, while Gemma on the other hand obviously thinks she look amazing!

Despite feeling jealous, Gemma tells Chesney he needs to wow Emma, so he tells his other half to meet him in the urban garden later that day because he has a surprise for her.

But soon Emma is totally forgotten when Rita and Gemma hear noises coming from inside their flat.

To make matters worse Gemma then notices that someone has been going through her bag – and as she unlocks her front door she is followed by a mysterious hooded man.

Any thoughts of his date with Emma soon go out of his mind when Chesney sees what is happening and intervenes, leaping on the stalker and tackling him to the ground.

Read more: Coronation Street SPOILER: Could the end be near for David and Shona?

But it’s only when the scuffle is over that Gemma is stunned to realise the man is none other than her own brother, Paul.

Gemma isn’t happy to see her sibling in the slightest and his presence leaves her on edge.

In the kebab shop Gemma tells Chesney that she can’t stick around in Weatherfield with her brother there and announces that she has decided to leave the Street.

Chesney is quick to reassure his friend… but as they share a hug, can Chesney persuade Gemma to stay?

Do you think Chesney should be with Emma or Gemma? Leave us a comment on our Facebook page @EntertainmentDailyFix and let us know what you think!