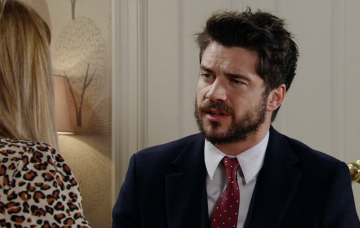 He's back with an apology

It’s the news fans of Coronation Street fans have been waiting for  – Adam Barlow will return to our screens on Friday May 17.

He left back in February to go travelling after making a pass at Sarah Platt – with the womanising charmer seeming to think there was more to their brief encounter than she would admit.

But after a few months away to clear his head and find himself, Adam comes back to Weatherfield. Is he a changed man?

He immediately finds himself in hot water with Imran, after leaving his business partner in the lurch with their law firm.

Adam apologises to Imran, but it’s Toyah who’s the most put out and unimpressed with Adam’s behaviour. Will she butt out long enough for the boys to work it out?

It might be a low-fanfare return for Adam, but it looks like things will get more steamy in the coming weeks as actor Sam Robertson, who plays him, has been spotted filming on location with Tina O’Brien, aka Sarah.

And pictures from the filming showed the pair embracing and locking lips.

Fans of Adam’s character have urged the soap to bring him back with a decent storyline.

Writing on the Digital Spy forums  one user began the conversation: “I hope they use Adam’s break to develop him a bit and give him his own storyline. What should happen when he comes back?”

“He seems to always play a part in a other people’s storylines or have failed romances,” a second aggrieved viewer added.

A third agreed: “Adam as a character is intelligent, funny, a bit of a bad boy, but also does have a heart. He’s a complex character that I don’t think has been fully explored. That’s why he’s popular.”

First up, someone chimed in: “He should develop a painkiller addiction IMO,” while another person added: “He should return with a girl he met on his travels. She’s not what she seems. Has a secret etc.”

Someone else had thought about it in great detail and felt with Adam’s ladies’ man history, a love child would be the perfect plot.

“It’s unoriginal, and there are already so many kids on the show, but I’d have him return with a 10 or 11 year old son he’d never known about. He’d be torn between still wanting to alleycat around sometimes and being a good dad.

“I could also see Peter getting involved, since Peter saw that his many failures as a father ruined Simon’s life, and the Peter/Adam relationship is one that should get much more focus than it does.”

They continued: “If they want to continue the Adam and Sarah story this could also be a part of it, as he could have a bit of a crush on Sarah, much to Adam’s embarrassment, and then he and Max could become friends, which would give Adam and Sarah more reasons to cross paths, slowly building up their relationship.”

Another user is clearly getting fed up of him being off our screens: “I just want to see Adam back. There’s plenty he could do once returned, illness, mental issues, addiction, dodgy professional stuff, crime, a serious partner finally, children, on and on, just bring him back for goodness sake.”

“I always thought an eating disorder storyline would be interesting with Adam, it’s something that’s not really been explored by adult male characters before,” added someone else.

Angie left Weatherfield at the beginning of the year, just before Adam, and actress Victoria Ekanoye has teased a return.

She told The Sun: “I’ve honestly had the time of my life and I can’t believe it’s been 18 months, it’s felt like no time but I guess time flies when you’re having fun.

Could fans wishes come true? Will Adam return with Angie and be one big happy family?

What do you think should happen to Adam when he returns? Leave us a comment on our Facebook page @EntertainmentDailyFix and let us know what you think.