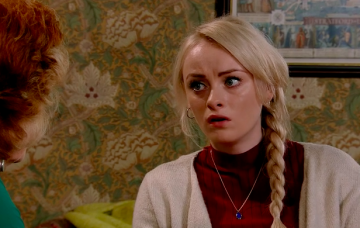 Fans don't want the factory worker to leave the cobbles

Coronation Street fans are terrified Sinead Tinker will die at Christmas as she loses her cancer fight.

Viewers have watched in tears this week as pregnant Sinead broke down in the hospital after being told she had cervical cancer.

But it’s set to get worse for fans with them convinced the factory worker is going to lose her battle with cancer in a heartbreaking Christmas storyline.

One worried fan tweeted: “Sinead or baby to die at Christmas I reckon.”

A second added: “Sad Christmas for the Barlows when Sinead dies #corrie”

Another wrote: “I already feel heartbroken about Sinead dying.”

Actress Katie McGlynn has received rave reviews for her performance in the storyline.

She recently addressed the possibility Sinead would die, insisting she wasn’t concerned about anything other than her performance.

Katie said: “”I was just excited. I thought, whatever the outcome is, it is what it is and I’m just happy to play the role.

The soap was slammed for aspects of the storyline last week when Sinead was told she had the cancer.

As she broke down in the hospital corridor, viewers were disgusted by the scene that showed NHS nurses ignoring her sobbing.

Are you worried Sinead will die at Christmas? Let us know what you think by leaving us a comment on our Facebook page @EntertainmentDailyFix!