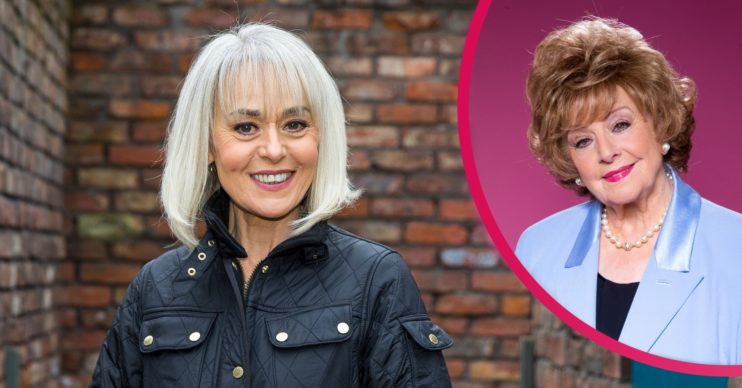 Award winning West End and Broadway actress Tracie Bennett will be reprising the role she made famous in the 80s and 90s.

Sharon was last seen on the cobbles in 1999 and no one is more surprised to see her than Rita. The pair previously fell out over Sharon’s attempt to sell The Kabin after it was gifted to her.

Rita’s former stepdaughter Jenny Connor is also less than impressed with the prodigal foster daughter’s return and Rita’s decision to give her another chance.

What has Sharon brought back to a place where she has more friends than enemies than friends? Will Rita live to regret forgiving Sharon?

Coronation Street: What did Tracie say about her return as Sharon Bentley?

On her return to Coronation Street 22 years after leaving and 39 years after first arriving as troubled teenager Sharon, Tracie said: “I am absolutely thrilled to be returning to the cobbles.

“It is a dream come true for me, I had such an amazing time there and I am looking forward to working with Barbara again and getting my teeth into the storylines they have planned for Sharon.

“I was first approached about coming back about 18 months ago, I was keen and excited to see what was in store but my work schedule and then the pandemic has meant that it has taken till now for it all to come together.

“I am so pleased that I can finally tell everyone as it has been hard trying to keep the secret.

Producer Iain MacLeod said: “It’s extremely exciting to see someone of Tracie’s calibre revisit a role so rich in history and with such complicated psychology.

“Sharon returns across some badly burned bridges to reconnect with Rita – but very quickly her presence becomes destabilising and extremely dangerous, in ways that I hope the viewers won’t see coming.

“The big question is: what has her life become since she was last on the street? The answer to that question will drive a massive story for us, which runs into the summer and beyond.”

Who is Sharon Bentley?

During her time in Weatherfield she made a play for Brian Tilsley and lied to Gail that they were having an affair. She then left and briefly returning in 1983.

She went out with Curly Watts but dumped him for Terry Duckworth.

In 1999 she returned to invite Rita to her wedding with Ian Bentley. However she dumped him at the alter exposing his affair with Natalie Barnes.

After the wedding fiasco, she came to work at the Kabin where she clashed with Leanne Battersby. Rita then offered the shop to Sharon as a birthday gift.

After an ill-fated romance with Danny Hargreaves and a suicide attempt, Sharon got back with in touch with Ian.

She put the Kabin up for sale to buy a house in Bolton with Ian. But Rita bought the shop back and sent Sharon packing.

What else has Tracie been in?

Since leaving Corrie Tracie has won two Oliver awards for her role in West End productions and was nominated for a Tony Award for he rportrayal of Judy Garland in End of the Rainbow on Broadway.

Her other theatre roles include Les Misérables and Hairspray.

More recently she played Carlotta in the National Theatre production of Follies. She also starred in the revival of Mame at Hope Mill Theatre, where she is patron.

Her television work include ITV dramas Scott and Bailey and The Bay.