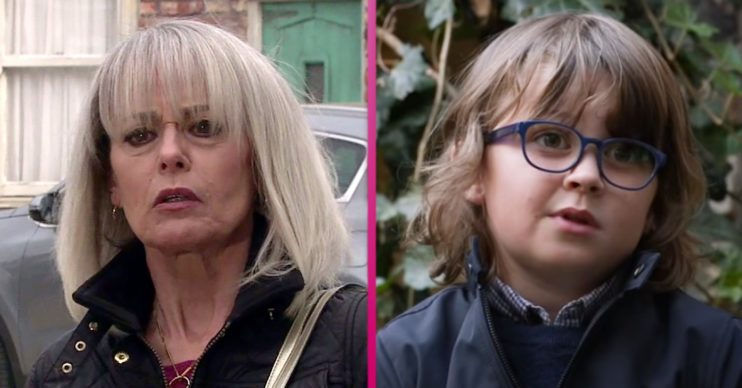 Sharon stopped Jenny from going to the police

In Monday night’s episode of the ITV soap (May 31) Jenny discovered that Sharon’s nephew Harvey is the same drug dealer who is after Leanne, Simon and Nick.

As she went to warn Rita about why her foster daughter had really returned, she ran into Sharon.

She confronted Sharon over kidnapping Sam and working with Harvey, but as Jenny walked off to call the police, Sharon pulled out a taser and tased her.

In last night’s episode (Tuesday, June 1) Gary realised the same van that kidnapped Sam was outside of the Kabin.

However as he broke the door in to get into the shop to see if Rita was okay, Sharon ran out the back.

Realising she was trying to flee Weatherfield, Gary took the keys from the van and was chased by Sharon and one of Harvey’s men, Robbie.

As they went down the alley way, Robbie pulled out a gun.

But on the other side of the fence, Sam could hear the commotion and went out to see what was happening, carrying his telescope case.

Sharon walked away as Robbie prepared to shoot Gary. Soon a gunshot could be heard.

However it was soon revealed that Sam had hit Robbie from behind and knocked him unconscious.

As Robbie was hit, the gun went off. But the bullet missed Gary.

Coronation Street: What did viewers say about Sharon and Sam’s scenes?

However viewers were not impressed with the attacks and called the scenes ‘bonkers’ and a ‘farce’.

#Corrie I'm not even going to ask how #Sam (10yrs old and under 5ft tall) was able to lift that object up high enough to take a swing so strong that caused an impact great enough to floor and let's say for arguments sake, a 6ft plus grown man. I'm not going to ask… #sam

#corrie oh come off it! This was meant to be gritty and dark! But now this is just plain farcical!
Sam hitting villains with telescopes
Jenny getting tazered in Broad daylight….

But some fans enjoyed the scenes.

Sharon and her taser and Jenny, comedy gold. Brilliant. #corrie

What did you think of the scenes?

Did you watch last night’s Coronation Street? Leave us a comment on our Facebook page @EntertainmentDailyFix and let us know what you think of these Emmerdale spoilers.