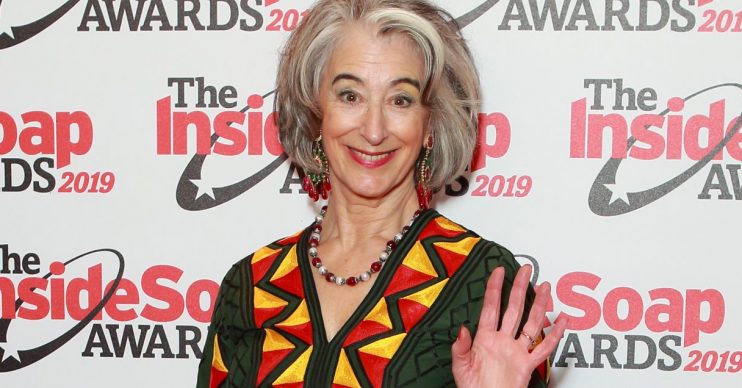 Soap secrets could have been spilled!

Scripts from Coronation Street were leaked after actress Maureen Lipman accidentally left them in a cab.

The Evelyn Plummer actress, 73, made the mistake while on the way to work with her Corrie co-star and flatmate Rula Lenska.

There are strict protocols in place to ensure scripts don’t get lost and storylines aren’t leaked.

Sadly these went out the window after Maureen had been learning her lines on the way into work and stuffed them into her backpack with her.

She left the backpack in the back of the taxi when they arrived on set along with a host of other expensive personal items.

By the time it was found a week later, miles from the soap’s Salford set, the scripts and her iPad and sunglasses were all missing.

Maureen has revealed how she and Rula were so desperate to find the bag that they recreated their entire journey to the set in an effort to work out where it could be – Jessica Fletcher style.

She told The Oldie: “I began to think laterally. We’d paid for our smoked-haddock fishcakes and the large vodka at the baffling Sainsbury’s self-service till.

“Maybe I’d removed the pack from my back to help me relax while addressing a speaking barcode?”

The pair of legendary actresses had no luck but eventually Maureen’s bag was found in a park in Stockport, miles from Media City where the soap is filmed.

A good Samaritan tracked down the star, not realising who she was, by the personal details on a bottle of prescription pills that had been left in the back.

But there was no sign of the scripts, Maureen’s iPad or her sunglasses, but still the actress was grateful to the woman named Karen for delivering the bag back to her.

Maureen added: “It smelled of dog pee, but she hadn’t washed it because of possible DNA traces. Full marks, Karen!”

The actress joined the soap as Evelyn more than a year ago – marking her return to the cobbles after previously playing Rovers landlady Lillian Spencer in 2002.

What do you think of Evelyn? Leave us a comment on our Facebook page @EntertainmentDailyFix and let us know what you think!