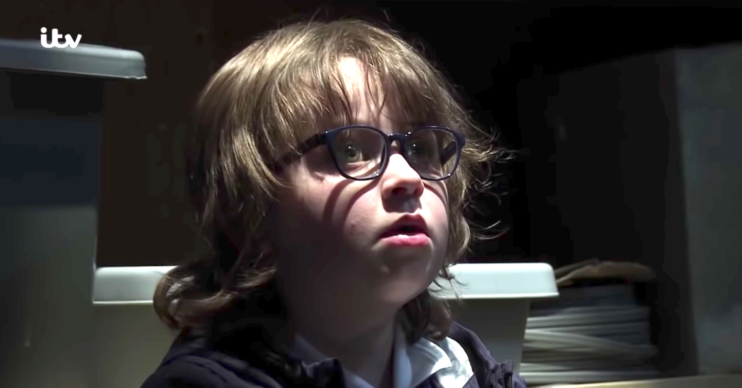 Coronation Street fans are horrified after watching the kidnap of  Sam Blakeman by Harvey’s thugs.

The little schoolboy was tricked into getting into a van by a henchman Noddy.

Drug dealer Harvey hopes to kidnap Sam and use him to draw Nick Tilsley out of hiding.

He will then force him to make Leanne Battersby and Simon Barlow withdraw their evidence against him to free him from prison.

His aunt Sharon Bentley cooked up a scheme that would see science-mad Sam tempted into a van himself so even if it was spotted it would seem like an accident.

But in tragic scenes even Sam thought it was an accident.

Kidnapper Noddy left a telescope in his van and loudly spoke about binning it in front of a horrified Sam.

Of course Sam climbed into the van to rescue it – and ended up seeing the doors slam behind him.

At the end of the episode he was pleading for the driver to find him to no avail.

When he realised the van driver had disappeared, Sam found a torch and began to sing to himself.

He sang: “Don’t give up because you have friends.

He then shouted: “Hello? Can someone help me?”

But no help was coming and Corrie viewers were heartbroken for him.

One wrote: “#Corrie. Poor little Sam. How could anyone do that to him, just leave him alone shut in a dark van?”

Another added: “OK, I know it’s completely fictional but I’m lying in bed worried to bits about Sam Blakeman on @ITVCorrie stuck inside that giant cylinder thing all on his own in the night.”