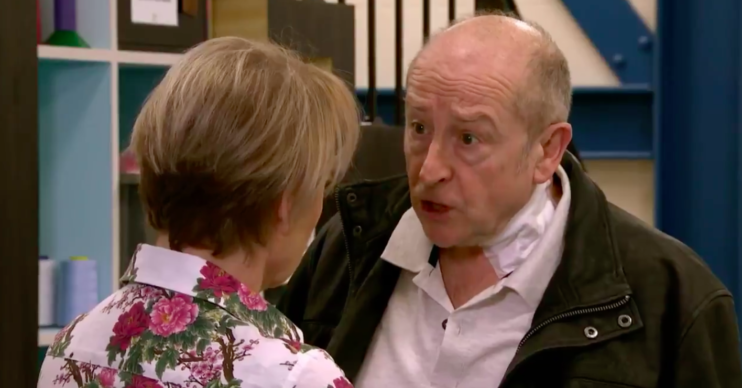 In an explosive trailer, the abuser bites off more than he can chew when he tries his manipulations on Sally who is having doubts about his innocence.

Here's an EXCLUSIVE first look at our brand new trailer!

Coming this June on Coronation Street… Will Yasmeen break her silence?

But as Sally tells her husband Tim about her doubts, Geoff gets wind of it.

Not able to leave it alone, the controlling abuser corners Sally.

Geoff tells her: “You’re forcing him to choose between his wife and his dad.

“What happens if he chooses his dad?”

The threat is clear but Sally is in no mood to give in to Geoff.

Instead, she will rally herself and put her own marriage in danger to save Yasmeen from Geoff and expose him to the cobbles.

And Geoff won’t be able to do anything to stop her. Will he?

One fan replied to the video: “I’m shook, what an exciting trailer.”

A third wrote: “God I can’t wait for Geoff to be found out at last.”

I’m shook, what an exciting trailer

Corrie star Sally Dyvenor has told how her character Sally has been slowly realising the extent of Geoff’s lies.

She said: “The first inkling of it was when Alya came into Geoff’s hospital room and screamed about the domestic abuse and what he’s done to Yasmeen over the weeks.

“It kind of rings a tiny bell in Sally, because there is just no way that Yasmeen is like that.

“And Sally knows it. There is no way she would just try to kill him.

The actress added: “But the more Alya drips things to Sally and the more Sally finds out, she starts thinking of the time when she was imprisoned for something she didn’t do and wants to help her.

“Then there’s one scene where Geoff gets angry with Sally and she sees this spark in him, and that’s it, she wants him out of the house.

“She starts to tell Tim how she is feeling about Geoff and asks him to leave – and she asks Tim to leave!

“Just because she is so all-consumed with what is going on.

“She goes to visit Yasmeen in prison, and Sally can see that Yasmeen is not her usual self and almost blaming herself for what has happened.”