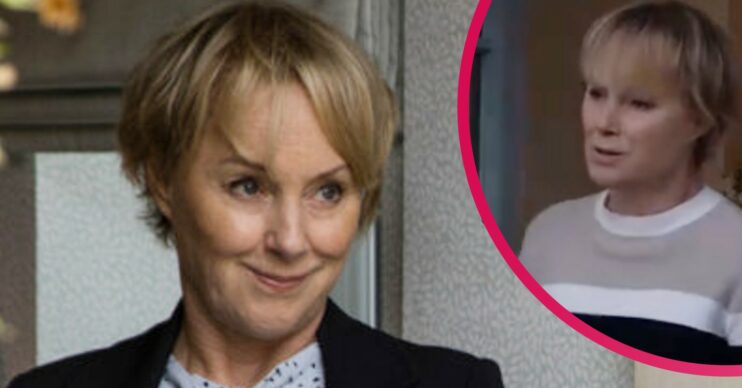 Coronation Street: Sally Metcalfe’s home has had a mini makeover!

Sally Metcalfe in Coronation Street has made some home improvements and it didn’t take eagle-eyed fans long to spot it!

Although the change was not referred to on screen, Sally‘s tired and dirty white door has gone. It’s been replaced with a spanking new modern grey one.

As Abi Webster banged on Sal’s door last night, the new entrance could be seen in all its glory.

On Wednesday night (February 24) Abi was desperate to see Sal after Kevin found out about Abi’s cheating.

As she knocked on Sally’s door, fans were quick to notice the old-fashioned white door was a completely different colour and style now.

It’s grey and much more modern.

That’s our Sal, always striving for the best!

Eagle-eyed viewers were quick to spot the change.

One even said it was “the most interesting part of the programme”!

Another wasn’t too keen and said they were struggling to get used to it.

Has Sally changed her door? #Corrie

When did Sally’s door change? #corrie

What happens next for Abi and Kevin?

Despite the door love, the more serious matter at hand is Sally’s involvement in Abi and Kevin‘s crisis.

Abi was forced to confess she cheated on Kevin last year after he heard her talking to Sal about it.

Sally had urged Abi to come clean, but ultimately agreed to keep quiet. However, Kevin had heard everything over bluetooth speaker.

He drove off, leaving Abi distraught.

She turned to Sally for advice on what to do and Sal told her to wait for Kev to calm down.

However, it wasn’t long before Kevin was bashing on Sally’s (new!) front door demanding to know why his ex-wife was keeping this secret from him.

Can Sally help Kev see sense? After all, he cheated on her multiple times during their marriage…

Will Abi and Kevin reunite?