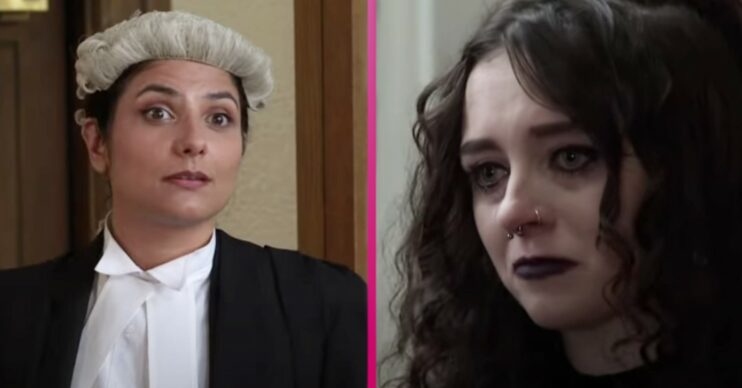 Sabeen is the barrister on Corey Brent's defence team

In last night’s episodes (Wednesday, September 1) Nina gave her new statement to the police. She was able to remember what happened on the night she and Seb were attacked.

Nina stood up in court and told everyone what happened the night she and Seb were attacked by Corey and his friends.

She recalled how Corey kicked Seb and Kelly Neelan begged him to stop.

Soon Sabeen began cross-examining Nina and showed images from her comic on a screen.

She brought up how Nina wasn’t able to remember what happened after the attack, as she received several blows to the head.

Going back to the drawings, Sabeen said they weren’t accurate as Kelly wasn’t drawn in them, and they know she was there at the time.

She soon suggested Nina’s memory kept changing and she wasn’t recalling true memories of what happened that night back in May.

Sabeen really is beyond vile. Just doing her job sure but still Nina’s the victim here, not the defendant.

Later Nina also talked about the reconstruction she did with Abi, Asha and Summer and Sabeen tried to discredit her.

But Nina was furious, saying Sabeen was sneering at her and demanded she apologise.

However viewers were also left furious with Sabeen for how she was with Nina.

sabeen is as bad as corey #Corrie

This questioning is getting increasingly desperate by Sabeen #Corrie

Have you been watching this week’s Coronation Street? Leave us a comment on our Facebook page @EntertainmentDailyFix and let us know what you think.