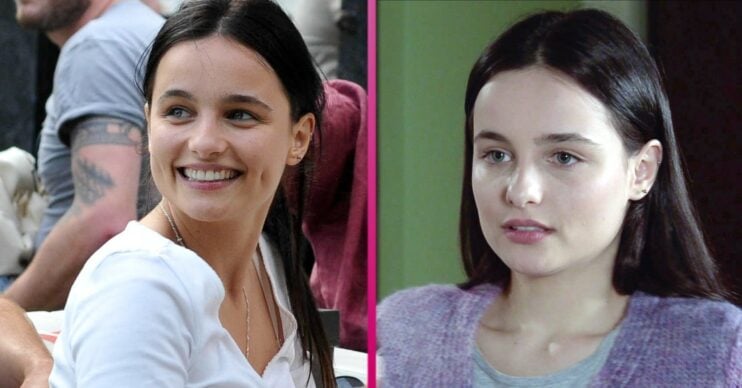 Ruxandra joined the show in 2019

On Instagram she posted a picture of her standing next to her co-star Alan Halsall, who played Alina’s now former fiancée Tyrone, outside the Rovers set.

She captioned the post: “I worked with some of the finest people, who are not only extremely talented but very humble and caring.

“They made me feel welcome and a part of this beautiful family. TA EVERYONE!

“People up north are well nice. Thank you everyone for the good wishes! Lots of love to you all, tune in tomorrow.”

Georgia Taylor, who plays Toyah Battersby in the soap, wrote: “Oh darling you’re like sunshine. You’ve been a joy. All the best for the future, you beaut.”

Fans are devastated that Ruxandra is leaving the show.

One wrote: “Why are you leaving? You are one of my favourite characters.”

A second commented: “It’s so sad to see you gone babe. Will you ever return or have you left for good?”

Another said: “You were amazing! You will be missed.”

Coronation Street: When is Alina leaving?

In last night’s episode of Corrie, Alina broke up with Tyrone after finding he confessed to kissing his ex Fiz.

However Alina confided in her friend Emma that she’s pregnant.

Alina packed up her stuff and went to leave the street, but Emma ended up letting slip to Ty that Alina is pregnant with his baby.

Tyrone went after her but was unable to convince her to stay.

Read more: How old is Alina in Coronation Street and is Ruxandra Porojnicu really leaving Tyrone?

In tonight’s episode (Thursday, September 16) Tyrone finds out Alina is yet to fly and tracks her down to a hotel.

He asks her to reconsider but makes out it’s over between them.